Z. Johnson on love for Deere: 'Has embraced' its spot 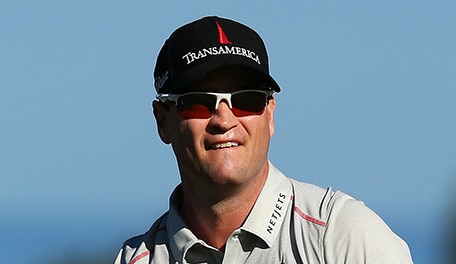 SILVIS, Ill. – John Deere, with its corporate headquarters just about five minutes up the road, announced on Tuesday a seven-year extension with the PGA Tour to continue to sponsor the John Deere Classic through at least 2023.

Zach Johnson would probably have preferred a commitment through 2033.

The 2013 champion and three-time runner-up is also a member of the tournament’s board of directors.

At his news conference Tuesday morning, Johnson was reminded that he enters this week with 24 consecutive rounds in the 60s at TPC Deere Run.

He was further reminded that he hasn’t finished worse than a tie for third in his last four starts.

Johnson’s affinity for this event stems from his upbringing in Cedar Rapids, IA, roughly 90 minutes from the Quad Cities. Needless to say, he’s kind of a happy here.

“I love coming back,” he said. “You guys can probably get your recorders out, those that have been here before at this time every year, and I’m probably going to sit here and say the same things. There’s just a peace about it here for me that I don’t have at many other tournaments.”

If there’s anyone who can rival Johnson’s success at the Deere, it’s Steve Stricker, who won three consecutive titles from 2009-2011. At 48, Stricker is already the host of a newly announced Champions Tour event in his home state of Wisconsin but said this week he’s looking forward to “another eight years of John Deeres,” which would carry him through the age of 56.

Despite Johnson and Stricker’s affinity for it, the Deere’s unique challenge remains its unenviable place on the PGA Tour schedule, one week ahead of and six time zones behind the Open Championship.

Jordan Spieth’s decision to honor his commitment to this event – where he claimed his first Tour victory in 2013, beating Johnson in a playoff – has been the topic of conversation since his U.S. Open victory, with some suggesting he would have been better off preparing at the Scottish Open or getting to St. Andrews a week early.

That said, the Deere, as Johnson puts it, “has embraced” its spot, offering a Sunday night charter to players headed for the British, a charter that could wind up carrying one extra passenger. One player who is not already in the Open field has a chance to earn an invite to the year’s third major with a top-5 finish this week via the Open Qualifying Series.

“They’ve embraced what they’ve had to combat, if that makes any sense,” Johnson said, referring to the tournament staff. “They’ve embraced the fact that just, in the calendar, it’s not the most ideal situations all the time. And they continue … to make it better. I mean, they’ve got an identity and they’ve stuck to that.”