Z. Johnson shakes off terrible start for 67 at Honda 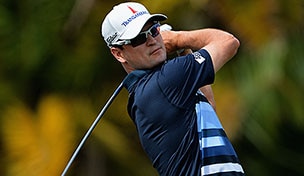 Getty Images
LAHAINA, HI - JANUARY 08: Emiliano Grillo of Argentina plays a shot on the fourth hole during round two of the Hyundai Tournament of Champions at the Plantation Course at Kapalua Golf Club on January 8, 2016 in Lahaina, Hawaii. (Photo by Cliff Hawkins/Getty Images)
-

PALM BEACH GARDENS, Fla. – Zach Johnson walked into the scoring room at PGA National, examined his card and wondered how, exactly, he was signing for a 3-under 67.

After all, five hours earlier, he had begun his opening round of the Honda Classic with a quadruple-bogey 8.

The details are gory: After a good drive on the par-4 11th, he was stuck between a 6- and 7-iron and opted for more club. He “pured” the shot, he said, but also eased into it, blocking his approach into the pond.

He walked about 10 yards ahead and decided to “jump” on the 7-iron. Splash.

So he stepped back two paces, grabbed the 6-iron, and put his sixth shot on the left fringe. Two putts later, he walked off the green at 4 over.

“The day could have gone the other way quickly,” he said afterward, “but I felt good about my game coming in.”

And for good reason. Johnson is playing the best golf of his career, rising to No. 7 in the world on the strength of three victories in his last nine starts. So, fittingly, he shook off the big number and rolled in seven birdies – four of which were inside 6 feet – on his way to a 67.

After the morning wave, he was just two shots off the lead.

After the round, Johnson’s two playing competitors, Tiger Woods and Keegan Bradley, were effusive in their praise. So, apparently, were the caddies, particularly Bradley’s looper, Steven “Pepsi” Hale.

Said Woods: “Not surprising knowing how tough this guy is. ... He definitely had a comeback player of the day award. I imagine if you flip it around and start off that way and finish that way, yeah, he would be pretty pissed.

“So he would much rather have it this way and fight back and earn it and get it this way. You have a certain feeling going into the next day than if he would have flipped it around.”

Of course, this gritty effort was no shock to Woods. He recently saw Johnson’s comeback heroics up close.

One of the forgotten aspects of Johnson’s dramatic victory last December at the World Challenge was the fact that he was four down with eight holes to play against the No. 1 player in the world on a track that he has won on five times.

Since then, Johnson hears about it when he’s walking down the fairway or practicing at home or scrolling through his Twitter mentions. Yes, he denied Woods yet another victory, but he’s particularly proud of the way he played down the stretch, closed the gap and pulled out a win.

“Those are the kinds of thoughts that I’m trying to keep,” he said.

Thursday’s comeback at the Honda reminded the 38-year-old grinder of his Q-School experience years ago, when he took an 8 (without a penalty stroke) on his opening hole at Hombre Golf Club. It was second stage, the make-or-break juncture for many pro hopefuls, and he responded by making just two bogeys the rest of the way and finishing second, by one.

This turnaround was even more impressive when considering his lack of history here at PGA National. Curiously, it is just his second career start (2008) at a track that places a premium on driving accuracy while rewarding strong iron play and sublime putting – in other words, Johnson’s bread and butter.

“I don’t know why I haven’t come back, pretty foolish,” he said. “I think if my game is sharp, I think I can put up some good results.”

These days, it’s more of a surprise when he doesn’t.