ZJ in January: St. Andrews 'my least favorite' in rota 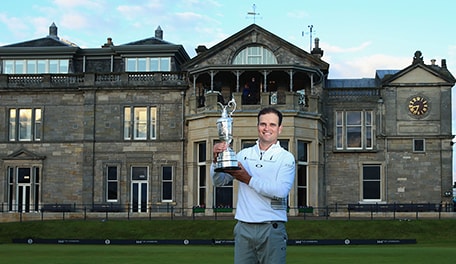 Right now, after claiming his second major victory there in a playoff of Monday, it’s hard to imagine Zach Johnson likes any golf course in the world more than St. Andrews.

But that wasn’t the case seven months ago.

In a Facebook post on Thursday, ESPN analyst Dottie Pepper resurrected the below quotes from a Johnson news conference earlier this year in Hawaii.

Johnson was asked before the Tournament of Champions which events he was most looking forward to in 2015.

"Trying to think of the schedule. Majors. No, no and no," he said, before offering specific thoughts on the Old Course. "I don't even know where the Open is. The British. No, no. That's my least favorite in the rotation. Yeah. I say that and I love that tournament and I still like St. Andrews. ... I think St. Andrews is terrific and it's my least favorite. ... I feel like it's one where you just gotta hit it left and you gotta hit it 290 in the air and it just doesn't favor me."

As for what he said at the time about this year’s final major venue:

"I don't like Whistling Straits,” he said. “I lost by a shot there and I don't like it. I mean I played for four days the best four days of ball striking I've ever had consecutively, whatever year that was [2010]. Played there in ['04]. Played all right. Didn't really like it, and I still don't like it.

"To me it wants to be a links, but it's the furthest thing from it because it's all aerial. There's no run-ups. You gotta carry it here to carry it there, that kind of thing. Is it beautiful?  Stunning. You feel like you're playing on the ocean. It's just contrived. That's why I don't like it."

At this rate, after what he said and what happened at St. Andrews, the golf world might need to prepare for another Johnson victory.