ZJ seeks to clear up corn-fusion over trophy photo 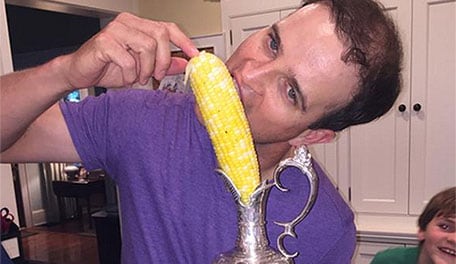 AKRON, Ohio – After a whirlwind victory lap to celebrate his second major victory, Zach Johnson is ready to get back to work this week at the WGC-Bridgestone Invitational.

Johnson captured the Open Championship last month in a four-hole playoff at St. Andrews, and the subsequent weeks have been filled with more celebration than golf. He hosted a party for family and friends at his home on St. Simons Island, Ga., and even tweeted a picture of what appeared to be him eating an ear of corn from the claret jug – a photo that he clarified Tuesday.

“I did have a corn on the cob in it. I did not eat the corn on the cob out of it,” Johnson said. “It was just a picture because I am from the state of Iowa. Our sweet corn, we take pride in it. It’s a corn-fed state. It’s a big industry, and as a result I thought it would be a cool picture.”

Another photo of Jordan Spieth sipping from the jug on the plane ride back from Scotland surfaced in the hours after Johnson’s win, and the champion golfer of the year confirmed that there have been plenty of beverages inside golf’s oldest trophy since he got his hands on it.

As an Iowan, this Jug has multi-purposes... pic.twitter.com/dROnlb3uwZ

“We’ve had wine in there, we’ve had champagne in there. Obviously, some beer in there and that kind of stuff,” he said. “My kids drank water out of it. They thought that was pretty cool.”

Johnson added that he plans to allow each of his team members to get some time at home with the trophy in the coming year, including his caddie, Damon Green, as well as his coach, physical therapist and manager.

“That jug is going to travel a lot,” he said. “It’s going to go - I don’t want to say it’s like the Stanley Cup because that’s not a fair assessment or analogy - but it’s a team jug.”

Johnson has his sights set on next week's PGA Championship, the season’s final major, having finished one shot out of the playoff at Whistling Straits in 2010. After his breakthrough victory at the 2007 Masters, he won the now-defunct AT&T Classic the very next month and remains motivated to pull off a similar double dip.

“Augusta was a lot of shock and awe,” he said. “I’m in awe right now, but I don’t think the shock is there, or the overall surprise of it is there. I feel like I’m a better player now than I was then.”