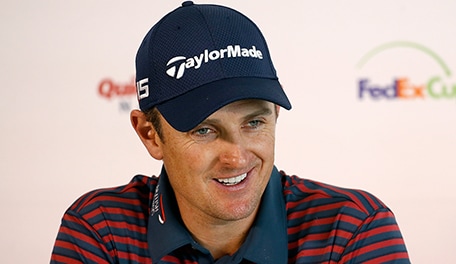 GAINESVILLE, Va. – Luke Donald was so impressed with Justin Rose’s ball-striking at the 2013 U.S. Open, which the latter won, that he made a wholesale swing change, moving to a new coach in Chuck Cook.

While Rose’s own epiphany wasn’t nearly as dramatic, he made an adjustment of his own after watching Zach Johnson win the Open Championship earlier this month.

Fresh off a transatlantic flight, Rose arrived at Robert Trent Jones Golf Club on Tuesday and went directly to the short-game area to work on his wedge play.

“I sort of evaluated my game from the Open Championship and obviously I look to who won, Zach Johnson, and tried to think what he did better than me,” said Rose, a two-time winner of the Quicken Loans National and this week’s defending champion. “You need to be very active with your wedge play, which Zach made a great career of.”

It is telling that Rose is among the game’s top ball-strikers, ninth on Tour in that category, but 133rd in approach shots from 125 to 150 yards.

Rose also said working on his wedge game allows him to fine-tune his swing and still conserve energy.

“It’s a great way of working on my golf swing at low-level intensity, which is good for my body,” he said.