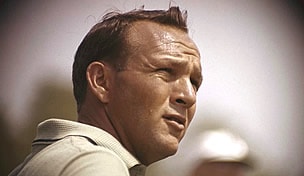 In recognition of the Arnold Palmer Invitational, Thomas Hauser’s book “Arnold Palmer: A Personal Journey” is being re-released.

Hauser was granted inside access to Palmer, his family, his friends and his business associates. The behind-the-scenes look also includes photographs from Palmer’s archive, allowing an intimate look into the life of a sporting icon.

Palmer, now 82, is arguably golf’s most popular figure and a champion on and off the course. His playing career included 92 world-wide victories, 62 PGA Tour wins and seven major championships. He captured four Masters titles, two British Opens and one U.S. Open.

He also captivated the public with his rugged, good looks; daring personality and charisma. Golf fans created “Arnie’s Army” and he was dubbed “The King.” Those same fans will be captivated by “Arnold Palmer: A Personal Journey” as it shows how the legendary man lived the American dream on and off the golf course.

The eBook edition includes a foreword from Golf Channel’s Rich Lerner, an afterword from the author and an original essay by Palmer entitled, “Reflections on the Game.”