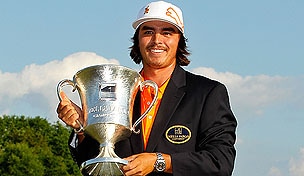 Getty Images
CHARLOTTE, NC - MAY 06: Rickie Fowler of the United States celebrates with the championship trophy after defeating Rory McIlroy of Northern Ireland and D.A. Points of the United States in a playoff during the final round to win the Wells Fargo Championship at the Quail Hollow Club on May 6, 2012 in Charlotte, North Carolina. (Photo by Streeter Lecka/Getty Images)  -

AVONDALE, La. ' Luke Donald is once again the No. 1 player in the Official World Golf Ranking. Closing the Zurich Classic with 5-under 67 at TPC Louisiana, Donald earned a third-place finish and enough ranking points to overtake Rory McIlroy for the top spot.

Donald needed to finish solo seventh or better to force the fourth swap of the No. 1 and No. 2 ranking in the last two months. He finished at 17 under, two shots out of the playoff between Ernie Els and eventual winner Jason Dufner.

'(Being No. 1) was a little bit of a motivation to try and play well today. The main focus was trying to win the tournament,' he said.

Donald played the final three rounds in 18 under with just one bogey. While not enough to overcome his opening 73, Donald goes into an off week with confidence.

'I got off to a slow start and that was the difference this week. It was a little too much to catch up on today's round,' he said. 'I'm very happy with how I played and have good momentum going into The Players Championship.'

Its possible the Englishman may arrive at Sawgrass as world No. 2. While Donald is off, Rory McIlroy will play at Quail Hollow, where he won in 2010.

'It's a nice consolation, going back and forth a little bit,' he said. 'Rory's turn next week at Quail Hollow.'