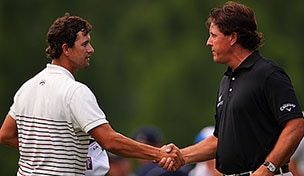 Getty Images
Matt Kuchar of the US follows his shot after teeing off at the fifth hole during the Northwestern Mutual Challenge golf tournament in Thousand Oaks, California on December 5, 2013. The Tiger Woods Foundation announced recently that the annual unofficial event hosted by the 14-time major champion will move to Florida in 2014 following the final World Challenge contested at Sherwood Country Club in Thousand Oaks, west of Los Angeles, from December 5-8th. (Photo by FREDERIC J. BROWN/AFP/Getty Images)
-

Adam Scott and Phil Mickelson had the kind of seasons every golfer dreams about – multiple wins around the world, including that all-important, career-defining major. So who had the better season? GolfChannel.com writers weigh in:

The 2013 season was deeply satisfying for both Adam Scott and Phil Mickelson, but Scott enjoyed a better, more consistent campaign, with last week’s Australian PGA a fitting coda.

So, what separated Scott?

Most notably, his excellence in the biggest events. The world No. 2 had three top 5s in majors, including his life-changing victory at the Masters. Phil had only two.

Scott also had a better scoring average and finished higher in the FedEx Cup race.

Phil had one more top 10 overall, but he did so in five more events.

Only three times Scott finished worse than 35th in a tournament. Phil had nine such events.

In career-defining seasons for both players, Scott's was just a little better.

They didn’t win a load of events this year, but they both captured our imaginations with such emotional breakthroughs.

Adam Scott or Phil Mickelson? They had such similarly gratifying seasons, how do you choose between them? Somebody hand me a dart.

Back against the wall, I’m going with Mickelson, but feeling dreadful about not picking Scott. I’m going with Lefty because his British Open breakthrough in a major that has exasperated and confounded him over the years came on the heels of another heartbreaking U.S. Open loss. The rebound gave Mickelson a larger overall starring role in this season than Scott, whose Masters victory was inspiring and riveting.

I’ll take Mickelson over Scott in what is essentially a toss-up.

Each player won a long-awaited major this year – Mickelson in his 20th appearance at the Open Championship; Scott as the first Australian to win the Masters. Each won one other PGA Tour event and another important international tournament. Each remained amongst the world’s top-five for much of the year.

Essentially, their performances were mirror images of each other. If we wanted to make this question even more difficult to answer, we could have thrown Tiger Woods’ name into the mix as well, in essence asking whether two more victories is “better” than winning a major.

In the end, I picked Mickelson for the sheer shock of his major over that of Scott. Prior to winning at Muirfield, the lefty had claimed only two career top-10 finishes at the Open. While it comes as little surprise that Scott broke the long losing streak for Aussies at Augusta, it’s still a tad jarring to see photos of Mickelson posing with a claret jug that most of us had assumed would always be out of reach.

For that reason alone, I give the nod in this one to Mickelson.

While both players had fantastic years in 2013, I’m favoring the guy whose wins meant slightly more – Adam Scott.

Sure, Phil Mickelson’s victory at the Open Championship was meaningful, and his Sunday 66 was likely the single best round of the year. But the improvement from four majors to five – even from two legs of the career Grand Slam to three – isn’t as monumental as moving from zero to one.

Much as I would view Mickelson’s 2004 Masters triumph as more significant than his win this summer at Muirfield, so, too, does Adam Scott’s entrance into the ranks of the major winners deserve its just due. Add in the pressure of becoming the first Australian to don a green jacket, his win last week in his native land at the Australian PGA and his comeback victory in the FedEx Cup Playoffs, and Scott’s 2013 ranks just ahead of Mickelson’s three-win campaign.

Though largely splitting hairs among two of the game’s best, the results for me mirror the current world rankings: Mickelson is way up there, but Scott has him beat.