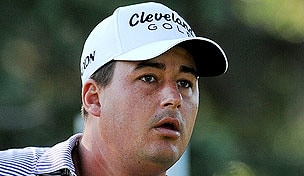 Michael Putnam, who led the Web.com Tour's regular-season money list, was voted the tour's Player of the Year by his fellow competitors.

Putnam, 30, from Tacoma, Wash., led the Web.com Tour's regular season with with $450,184 in earnings and won two tournaments, the Mexico Championship and Mid-Atlantic Championship.  His wins came in back-to-back events in late May and early June.

Also on the Player of the Year ballot were Chesson Hadley, Ben Martin and John Peterson.

Putnam, a former standout at Pepperdine University, tied for second at the South Georgia Classic in April and tied for third at the Albertsons Boise Open in July. He led the tour with nine top-10 finishes and 14 top 25s.  He made the cut in 19 of 23 starts, and was a cumulative 166-under par for the year.

“On behalf of the PGA Tour, I would like to congratulate Michael on an outstanding year on the Web.com Tour,” commissioner Tim Finchem said.  “He excelled throughout the season and is a deserving honoree.  We wish him all the best on the PGA Tour. I also congratulate Chesson, Ben and John on their terrific seasons and welcome them to the PGA Tour.”

“I am honored to be voted Player of the Year by my fellow players,” said Putnam, who receives the Jack Nicklaus Award.  “I truly believe this past season on the Web.com Tour has prepared me for success on the PGA Tour."

“Michael Putnam has been a wonderful representative for the Web.com Tour, not only with his golf clubs but with the media, tournament sponsors, the fans and everyone else he came in touch with,” said Bill Calfee, president of the Web.com Tour.

As the Web.com Tour’s 2013 regular-season leading money winner, Putnam is fully exempt in 2013-14 and receives an invitation to The Players Championship at TPC Sawgrass in Ponte Vedra Beach, Fla., next May.

In the tour's statistical categories, Putnam finished second in greens in regulation percentage (74.31), T-3 in scoring average (69.22) and sixth in all-around ranking (226).