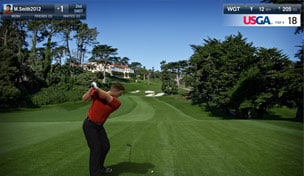 Test your golf skills virtually on The Olympic Club in a free 9-hole closest to the pin challenge.  Play Now!

THE OLYMPIC CLUB OVERVIEW
The Olympic Club Lake Course, opened in 1924, designed by Willie Watson and Sam Whiting, redesigned in 1927 by Sam Whiting due to damage, is considered one of the top 100 golf courses in the world. The Olympic Club is almost entirely within the borders of San Francisco with no water hazards, but borders Lake Merced. Olympic has proudly hosted the US Open in 1955, 1966, 1987, 1998, and 2012. The Olympic Club Lake Course has been contributed to by designers Robert Trent Jones, Sr. and Bill Love.