Golfers Who Give Back: Michael J. Fox 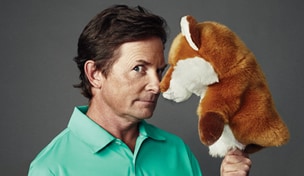 Of all the golf lovers in this collection of game changers, Michael J. Fox might be the biggest giver. In 12 years, the Michael J. Fox Foundation for Parkinson's Research has directed about $300 million to research on the disease. 'We have no agenda other than to cure this,' says, Fox, 51, the 'Back to the Future' star who was diagnosed with Parkinson's in 1991 and announced it in 1998. Fox still loves to make people laugh, and he cracks up when recalling his start as a golfer in the early to mid-2000s, when his 'golf uncles' would urge him to stay still over the ball. 'Be still over the ball?' he'd say. 'If I could be still over my soup, I'd be happy.'

Q: It's been more than 20 years since your diagnosis. How are you doing?

A: I've been feeling pretty good lately and felt like I could work a bit more, so I did 'The Good Wife,' and I did an episode on 'Curb Your Enthusiasm,' and I've been speaking around the country and connecting with folks in a way I haven't since I did 'Spin City' and the 'Back to the Future' movies and 'Family Ties.'

Golfers Who Give Back: Bill Clinton | Michael Phelps | Morgan Freeman

A: And I'm sure my character will be a golfer, and golf will be featured.

Q: We loved your willingness to display the effects of Parkinson's with Larry David in 'Curb Your Enthusiasm.'

A: When you have a disability, you have two things to deal with: your own experience, and everyone else's attitude toward your experience. That's what was fun about 'Curb Your Enthusiasm.' It was kind of like saying, Look, I know what I've got, and I know how to deal with it. I appreciate your support and concern, but I'm OK. I have a great family and a great life, and while I'm working toward a cure, I accept and understand my condition. But acceptance doesn't mean resignation. I can deal with the facts of it, but beyond that, I have a life to live.

Q: And golf has become a big part of your life.

A: I remember walking the course a few times with my dad when I was probably 5 or 6. I didn't play; he brought me to find balls. I'd scramble into the bushes that no one else would get into and get scratched by briars and bitten by bugs.

Q: You played hockey and lacrosse growing up in Canada. Why not golf?

A: I didn't have the wherewithal to play. There was no First Tee, and I wasn't from a well-off background. The money I did save for recreational sports I put into hockey and skiing. Then in my 20s, I had this kind of contemporary actors' attitude about golf that, There's plenty of time for golf - when I'm dead.

Q: But you picked it up.

A: Tiger was a big part of it, and Annika Sorenstam was really an inspiration. When she played in that first men's event, I thought, Wow! This is cool. This is a sport for risk-takers.

Q: How did you start?

A: I have these guys I call my 'golf uncles.' People like Tim Simpson, Cam Neely - and my friend Ted Davis, who would bring me out when it was embarrassing. But he persevered until I had a game when I could tee off at the first tee and actually get on the green in two. I said to my wife, Tracy, 'I've been thinking about all of my golf uncles and how they put up with me when I couldn't play that well. And, now, finally, I can play a little bit and it's great, and she goes, 'Yeah, they're crack dealers - and they got you addicted!'

Q: How well can you play with Parkinson's?

A: I'm a horrible golfer. [Laughs.] I've been so lucky to be celebrated for what I do and really kind of humbled about that. It's great to do something where I really suck. My best score for 18 holes is 46 out and 46 in, and I'm a 22-handicap.

My friend Clark Gregg, from the 'Avenger' movies, has a great description of me teeing off: He says I look like I'm between two subway cars with a foot on each platform. Then he says, 'And you hit the ball 220 yards, and I don't know how you do it.'

Q: How tired are you after walking 18 holes?

A: Oh, I'm on an IV! [Laughs.] It's hard for me to walk because I get too tired, but I got to play the National [Golf Links of America] this summer, and I had to walk. When I got off the 18th, I couldn't lift my Arnold Palmer.

Q: Do Tracy, your son or three daughters play?

A: There's a theater named after me in Burnaby, British Columbia, and they have a tournament I play in with my brother and his son. My son came last time; my sister who passed away used to play with us. My mom is 82 years old, and she was in the golf cart, and we got to where we weren't going to win, so we were just having fun. Anytime our putt was within 12 feet, we'd have my mom come out and putt it. And she drained six in a row! I've got pictures of us falling on the ground. It was hilarious.

Q: You watch a lot of golf. Who's your favorite?

A: Tiger. Ever since he was a kid. Rory is pretty exciting to watch, and I definitely root for Phil, too. But anytime anyone's been through something, whether they brought it on themselves or whatever, I love to watch them come back. I know what it's like to be 22 years old and go from just being a kid to having a Ferrari and girlfriends all over the place, and you can't pay for dinner in a restaurant. It's heavy stuff and hard to handle.

Q: What about your foundation makes you the most proud?

A: I always say when people affected by Parkinson's wake up in the morning and say, 'Who's trying to find a cure for this? We are!' What's been really impressive to me is people with Parkinson's who say, 'I hid this until you came out, but now when people ask me, 'What do you have?' and I say 'Parkinson's,' they say, 'Oh, like Michael Fox.' ' Now I feel like I belong to something. I'm not alone.

Q: Sergey Brin, the Google co-founder, and his wife, Anne Wojcicki, are helping in huge ways.

A: Sergey and Anne have been tremendously generous. Sergey has a connection to one of the genes that's an indicator Parkinson's is possible in that family, so he and Anne set up a challenge fund where for every dollar we raise from new donors through Dec. 31 this year, they'll match it. Nike auctioned off a limited series of the Mag shoes from 'Back to the Future II' on eBay, and we raised over $4 million. Sergey and Anne matched it, and it turned into almost $10 million.

Q: What can readers do?

A: One of the huge needs is for people to get involved with clinical trials. I'm talking about people who have Parkinson's and, especially, people who don't have Parkinson's. If you're a male in your 40s or 50s, this is a group we really need to tap into. If you want to do something good and feel good about yourself, check into the clinical trials at foxtrialfinder.org.