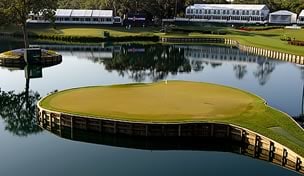 The Golf Guy weighs in on The Players Championship

17th – For all the critics that go out of their way to come up with reasons as to why they hate the much-maligned island green at TPC Sawgrass, I have two words for you – shut your face. Amazing that the same people that complain about the same boring courses, the same boring leaderbaords and the same boring PGA Tour personalities can somehow muster up more complaints when it comes to golf’s iconic hole. Golf is a sport – entertainment. The par-3 17th is  an actual treat for the fans that watch. Unlike the endless amount of non-descript par-4s that littler the rest of the Tour.

5th major – The Tour did a hell of job making everyone believe that The Players Championship was indeed the fifth major. I was gladly buying it. The TV ratings were backing it up as well. Then … well, then the World Golf Championships came into the fold.