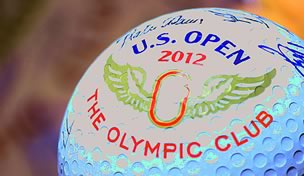 The 112th U.S. Open has come and gone. Time to reflect on the week, because, you know, it is what it is. Or at this point should I say … it was what it was? Fore!

The Olympic Club: Kinda enjoyed it, kinda didn’t. Narrow fairways and hellacious rough make Jack a dull boy. Hold on a sec – I couldn’t get enough of the ‘pull of Lake Merced’ comments made at least 793 times during the week.

Tiger Woods: They talked endlessly about The Olympic Club’s ‘burger dogs’ all week (a hamburger shaped to be used on a hotdog bun), but what I thought came out of the week was a new sandwich – the Eldrick. Toasted bun, a slice of old Tiger and a slice of new Tiger, plenty of cheese, and topped with a creamy helping of ‘traj sauce.’

Casey Martin: Never again will I complain about having to bend over to tie my shoes.

Webb Simpson: Please hire your wife Dowd as your caddie. The more TV face time she gets, the better. And those cheekbones of hers … BAM!

Mr. 1 and 2: Shame on you both, Luke and Rory. Not only did you cost me money, you cost me, well, just money I guess. See you guys at the Open Championship ... I hope.

Brian Rowell: Congrats on finishing DFL! Rounds of 86-82 left you just outside the cut line. Go check out his scorecard on GC.com – it’s sublime.

Merion Golf Club: I can’t wait to get acquainted before next year’s U.S. Open in Ardmore, Pa. The thought of your sexy wicker baskets has me intrigued.