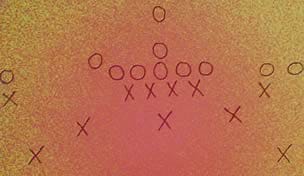 Getty Images
VIRGINIA WATER, ENGLAND - MAY 20: Oliver Wilson of England tees off on the 12th hole during the first round of the BMW PGA Championship on the West Course at Wentworth on May 20, 2010 in Virginia Water, England. (Photo by Warren Little/Getty Images)  -

With all the hoopla surrounding the NFL Draft, the Golf Guy got to thinking of a roster of players to fill out a starting line up on both sides of the ball. But with a twist ... with professional golfers – not NFL players. And like usual, let's agree to disagree on my selections.

Running back – Lee Westwood: Bruising back that can carry the load and wear down defenses.

Wide receiver – Dustin Johnson: A match made in heaven for out patterns and red zone scoring.

Wide receiver – Rory McIlroy: Young, hungry, willing to work to be the best. Mature beyond his years.

Center – Tim Herron: Smart, seasoned veteran, trusted by QB to do the job.

Right guard – John Daly: Paired with Stadler and Herron, gives QB and running back support in the middle to make positive yardage on every play.

Defensive End – Thomas Bjorn: The Dane has the size and strength plus a rock-solid jaw line that simply says ‘I’m all business.’

Outside Linebacker – Gary Woodland: Completes a devastating, dominating linebacker unit with youth and plenty of strength.

Cornerback – Ben Curtis: Tough, durable and never gives up. Just when you think he's down and out, he surprises you.

Safety – Jeff Overton: When his head is in the ballgame – and not sticking out of the roof of a limo – he brings plenty of passion.

Punter – Luke Donald: Precise, cerebral player that can pin down opponents deep in their own territory.