Create more swing speed and bomb it like Johnson 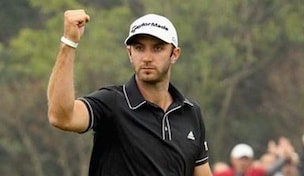 Dustin Johnson picked up arguably the biggest win of his career Sunday by claiming his first World Golf Championship title in the HSBC Championship in Shanghai, China.

Guys like him could have just as easily starred on their football, baseball or basketball team, but instead chose golf to use their athletic ability.

One thing that Johnson’s athletic ability gives him is an advantage in distance. He can flat bomb it.

In Shanghai, he tied for third in the field with the longest drive average over four rounds. In rounds three and four, his longest drives reached 361 yards!

Most of us will never be able to produce the clubhead speed of Dustin Johnson, which allows him to hit the ball extremely far, but I do believe most players can learn to create more speed and generate more distance.

• The first thing I do to help my students create more speed is the “whoosh” drill. Hold the club upside down (grip pointing at the ground) in your trailing hand only (right hand for right-handed golfer). Practice making swings where the club makes a loud whoosh just after where the ball would be. Focus on using your body, similar to a throwing motion to transfer your weight to the front foot and make a finish at the end of the swing.

• Use a shorter backswing to feel proper coil in your body. As you make a backswing, your upper body should be turning more than the lower body away from the target. This creates coil, or separation, which can be felt in your core muscles at the top of the swing. When the club goes back too far, you tend to lose that coil. Make shorter, slower backswings to feel your body coil. Then, with relaxed arms, “whoosh” the club through impact, similar to the drill above.

For more tips from Golf Channel to help you add distance to your game, click here.