Get back to fundamentals to break out of a slump 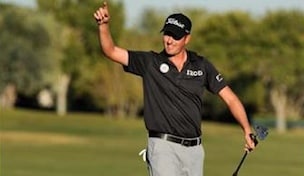 Getty Images
Graham DeLaet of Canada and Jason Day of Australia and the International Team react to a birdie putt on the second hole during the Day Two Foursome Matches at the Muirfield Village Golf Club on October 4, 2013 in Dublin, Ohio. (Photo by Gregory Shamus/Getty Images)  -

Webb Simpson proved at TPC Summerlin that slumps are meant to be broken.

Snapping a 16-month winless drought, Simpson dominated the field at the Shriners Hospitals for Children Open with a six-shot victory.

Simpson won the U.S. Open in 2012 but did not find his way to the winner’s circle again until Sunday.

It’s difficult to call it a slump since there are so many guys on the PGA Tour that have been there for years and never tasted victory.

But there’s a valuable lesson to be learned when you see a player reach the top of his profession and struggle shortly after.

The story of players winning major tournaments and disappearing for a while is a common one.

Simpson, however, showed us that with a little perseverance, slumps are temporary.

Slumps are a bizarre occurrence in golf. They seemingly can come from nowhere and when we least expect them.

And while slumps might not be 100 percent avoidable, there are some things you can do to make sure that when a slump arises you can get your game back on track in a hurry.

• The first step to break a slump is to go back to fundamentals. The slightest change in grip or posture can set in motion a set of compensations during the swing that can ruin your game indefinitely. Whenever a player comes to me in desperation, the first thing I always check are fundamentals. Do the same or find a coach that can help you do the same and the rest will be much easier.

• Manage your emotions and stay positive. I know that sounds wishy-washy, but golf is not just a mental game, it’s an emotional game and there is nothing that will send your emotions into a tailspin faster than performing on the course below your known abilities. Remember that golf is played one shot at a time and that the next swing you make could be the beginning of your next hot streak!

For more tips from Golf Channel to help you improve your mental game, click here.