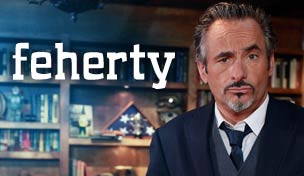 Getty Images
TIMONIUM, MD - OCTOBER 10: John Morse smiles as he finishes his round of 68 during the second round of the Constellation Energy Senior Players Championship at Baltimore Country Club East Course held on October 10, 2008 in Timonium, Maryland (Photo by Michael Cohen/Getty Images)  -

It is Super Bowl weekend and what better way to celebrate than with witty, charming and funny, David Feherty, performing LIVE for a room full of hyped up Super Bowl fans! Feherty hits the stage for Feherty Live during Super Bowl XLVI week in Indianapolis. The show will be taped before a live audience and will air Saturday 10PM ET, only on Golf Channel.  Joining Feherty on stage is Denver Broncos quarterback Tim Tebow, Famed Golfer and Indiana native Fuzzy Zoeller and Football Greats Joe Theisman and Steve Mariucci. Musical guest includes singer-songwriter, Josh Kelly.

Plus, included in the show will be taped features of Feherty roaming the streets of Indianapolis and taking in the entire Super Bowl experience.  Included in Feherty’s Super Bowl experience is candid conversations with players and coaches during Media Day.  Click here to get a sneak peek at Feherty having some fun during Media Day with the New York Giants and New England Patriots.

Watch Feherty Live Saturday, February 4 at 10PM ET only on Golf Channel.  Plus, get ready for the second season of Feherty premiering on February 27 10PM ET.