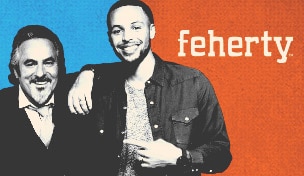 NBA All-Star point guard for the Golden State Warriors and well-known golf enthusiast Stephen Curry will visit with David Feherty on an all-new episode of Emmy-nominated Feherty premiering Monday, May 15 at 9pm ET on Golf Channel. Among topics discussed during the interview, the two-time NBA Most Valuable Player talks about his love for golf, and how he remains grounded despite having evolved into one of the most prominent athletes in the world.

During the interview, Curry tells Feherty about the impact Tiger Woods and Michael Jordan had on him. Click here for a preview.