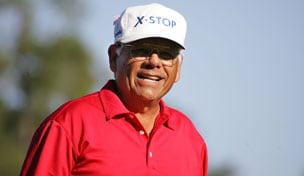 In honor of the 2013 U.S. Open, Golf Channel goes back 39 years in history to the same golf tournament,  the U.S. Open, at the same golf course, Merion Golf Club, but this time the winner was Lee Trevino.  Tonight at 10PM ET watch the premiere of 1971 U.S. Open: Lee Trevino an American Champion.

This documentary captures Trevino’s second U.S. Open victory and how he claimed his place among the great champions in U.S. Open history.  Trevino says this particular win meant the world to him and gave his the confidence he needed to feel like he belong to the fraternity of PGA TOUR brothers and it was all because he beat Jack Nicklaus.

Tonight’s program also dives into events on and off the golf course and includes perspectives about Trevino’s life and career from friends, current and past players such as golfers Johnny Miller, Curtis Strange,  Ben Crenshaw, Hale Irwin, Lanny Wadkins, Tom Watson and more.

Tune in tonight at 10PM ET to learn more about Lee Trevino’s rise from an impoverished childhood to become arguably the greatest shot make and one of the beloved personalities the game has ever seen.