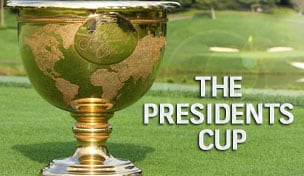 The United States will go up against a team of the world’s best non-European international players next week during the 10th contestation of the Presidents Cup. The Jack Nicklaus-design Muirfield Village in Dublin, Ohio will host the biennial team match-play competition, and Golf Channel and NBC are set to deliver all the action and intrigue from the 2013 Presidents Cup.

United States Team Captain Fred Couples and team anchor Tiger Woods, along with veteran Phil Mickelson and rookie Jordan Spieth, will try to uphold the Americans’ tradition of Presidents Cup dominance. But the International Team is hungry for a win since its first-and-only victory in 1998. Lead by Captain Nick Price, the international squad will test the American eminence and seek redemption with the help of 2013 Masters champ Adam Scott and fellow Aussie Jason Day, along with veteran Ernie Els.