At 20, Spieth is really something 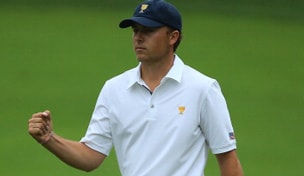 DUBLIN, Ohio – Among the many highlights for the U.S. team at the Presidents Cup was the play of 20-year-old Jordan Spieth.

The rookie teamed with Steve Stricker to go 2-1-0 in team play and although he lost his singles match to Graham DeLaet his solid debut in team play set a promising stage for a possible maiden Ryder Cup appearance next year in Scotland.

“To be surrounded by the best players in the world, as my teammates, in the back of my mind, I wasn't too worried about it and it gave me a little more confidence in the beginning,” Spieth said. “Having Steve as my partner the first couple matches, we were able to get out there and get a couple wins, which settled me down for the rest of the week.”