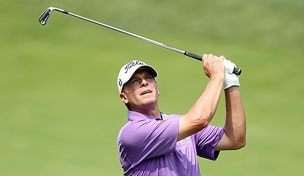 DUBLIN, Ohio – Steve Stricker isn’t sure which of his nine career PGA Tour victories ranks as the best.

“Good question,” he said while contemplating it Saturday evening. “You know, maybe the Match Play, Deutsche Bank, maybe even being on The Ryder Cup teams. I look at those pretty highly, too, being a part of those winning teams.”

Perhaps he’ll think about it overnight, because Stricker may be about to add a 10th win to his resume that would be as impressive as any he’s earned before.

Through 54 holes, Stricker leads the Memorial Tournament by three strokes following rounds of 68-67-69. Despite the likes of Jonathan Byrd, Matt Kuchar and Brandt Jobe in pursuit, he remains in the driver’s seat for a sixth win since the beginning of 2009.

“This would rank right up there, no question,” Stricker said of a potential win here. “It's a great tournament. You know, it's Jack's tournament. I've gotten to know Jack over the years. He was the captain of one of the Presidents Cup teams I was on. Played against his son Gary in college.

“So he's a friend, greatest player of all-time, and to win his tournament would be pretty special.”

If Stricker is to prevail on Sunday, he will need to overcome an affliction of poor final-round performances so far this season.

“My final round scoring average this year I know hasn't been too good, so hopefully I can erase that tomorrow and put up a good one,” he said. “I don't know why. No idea. Because the first three rounds are sub-70, and then that final round is 71. I've just had some poor final round showings, and I don't know why.”