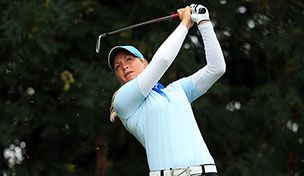 Thanks in large part to a hole-in-one Friday at Sunrise Golf and Country Club, Suzann Pettersen has built a five-shot lead at the Sunrise LPGA Taiwan Championship as she continues to close in on the top spot in the Rolex Rankings.

Pettersen, who rose to No. 2 in the world after winning her second major title last month at the Evian Championship, carded a 3-under 69 in the second round and at 7-under 137 leads by five over Carlota Ciganda and Sun-Young Yoo. According to the Norwegian, her ace from 133 yards on the second hole was one that she saw coming.

'I called the shot, I hit it exactly how I wanted and was fortunate enough that I had a good break,' explained Pettersen, who used a pitching wedge to record her third career LPGA hole-in-one. 'It's nice to get a hole-in-one when you actually call the shot in advance and then pull the trigger.'

With only five players under par through 36 holes, Pettersen appears largely in control, as she owns two of only three sub-70 rounds thus far this week in Taiwan. A winner here last year by three shots, the 32-year-old is clearly comfortable at a venue where she has now recorded six straight rounds in the 60s.

'Last year we played here, it was not quite as windy,' noted Pettersen, who has already won three times this year on the LPGA Tour. 'This is probably up to where it was the first year we were here. This is to the point where it's really challenging.'

Speaking after the round, Pettersen reiterated her focus on chasing down world No. 1 Inbee Park, who appeared to have a nearly insurmountable lead atop the Rolex Rankings just a few months ago.

'If I want to finish where I want to finish at the end of the year, I've got to start this week and try to make the most out of this tournament,' added Pettersen, who trailed an idle Park by 0.89 points entering this week. 'That's kind of where my focus is.'