Actor chimes in on Tiger-Carlton comparison 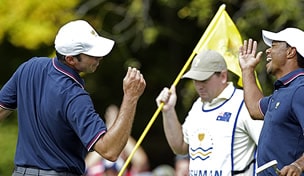 Getty Images
From Big Break III Ladies Only. Watch the full season <a href='http://www.golfchannel.com/tv/the-big-break-ladies-only/'> HERE </a>  -

Squirrels and handshakes ... the opening day of the Presidents Cup was as much about on-course antics as it was about the actual golf played.

With the U.S. staked to a 3 1/2 to 2 1/2 lead after Day 1, Tiger Woods and Matt Kuchar gained attention for their 'Fresh Prince of Bel-Air'-inspired celebration. After winning their match over Angel Cabrera and Marc Leishman, 5 and 4, Kuchar took credit for implementing the handshake, calling Woods 'the perfect Carlton' to refer to Carlton Banks, another character from the '90s sitcom.

Late Thursday night, Alfonso Ribeiro – who played the role of Carlton on the show – took to Twitter to chime in on Kuchar's comments.

Very cool to have Matt kuchar call @TigerWoods Carlton to his will smith. They did the FPOBA hand shake after every birdie.

An avid golfer, Ribeiro has been known to break out his character's famous dance moves on the course as well.