After Further Review: Don't read too much in Woods' performance 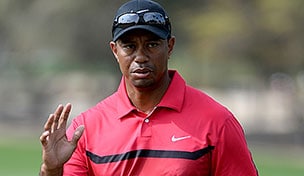 Each week, GolfChannel.com takes a look back at the week in golf. In this edition of After Further Review, our writers weigh in on Tiger Woods' lackluster performance in Dubai and the raucous week at TPC Scottsdale for the Waste Management Phoenix Open.

For those fretting about Tiger Woods’ scruffy start to 2014, remember this: The world No. 1 still has three stroke-play events to figure it out before the Masters, where he has finished outside the top 6 just once in his last nine appearances.

It’s clear now that when Woods said that he “didn’t do much” this offseason, he meant so literally. He shut it down completely after his World Challenge event – perhaps to rest his aching back, maybe because all of his focus is on the majors, not tournaments that might as well fall under spring training.

Ramping up for the year, it’s reasonable to expect there will be spells of rust and poor form. The first event that truly matters is still two months away. Chances are, he’ll be ready, like usual.  - Ryan Lavner

After spending parts of four afternoons in and around the 16th hole at TPC Scottsdale, I'm convinced of two things: 1. This scene isn't going away anytime soon; and 2. The PGA Tour wishes it would.

For years, the 16th has toed the line between fun and fury. This year, there were some subtle changes that left the 15,000 fans a bit more subdued and TV viewers missing some of the antics. Let's give 'em credit, though: This isn't just about squashing something fun; it's about keeping the environment safe for both players and spectators, and maintaining decorum in a party atmosphere.

That's a difficult balance to strike, but it's become painfully obvious the Tour is trying to reverse the recent trend as much as it can. - Jason Sobel

Bubba Watson moaned and groaned about slow play on the PGA Tour all week in his post-round interviews at the Waste Management Phoenix Open. He was unceremonious and unabashed in his criticism, saying things like, “I don’t know if you know, but the PGA Tour plays slow” and “I want to watch the Super Bowl. … Under five hours tomorrow, boys. That’s not going to happen.”

Watson’s Sunday round – where he bogeyed the final hole to lose to Kevin Stadler by one – was five hours and 15 minutes. So while he didn’t get everything he wanted, at least he can make it back to his Scottsdale home in time for kick-off. - Bailey Mosier

So Tiger Woods is off to his worst start as a pro. Maybe that’s not such a bad thing, and he’s just switching up the formula. It can’t hurt as he seeks to end his five-year drought in majors.

He was sharp early last year. When he won at Torrey Pines in 2013, we all thought he was on his way back to hoisting trophies in majors again. He did, after all, seem to win a major every year he started off with a win at Torrey. The first six times he won at Torrey at year’s start, he went on to win a major five times. It didn’t happen again, of course.

Woods is 38, and you can’t blame him if he gave his body and even his mind some extra rest this offseason. What he’s sacrificing now may pay dividends later. It’s too early to tell. Doral and Bay Hill in March will give us the real feel for how ready he is for Augusta National. If he's off at those places, after being off at Torrey Pines, something's wrong. – Randall Mell