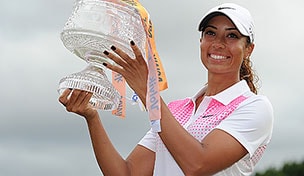 Getty Images
Tiger Woods takes a drop after hitting in the water on the 11th hole during the first round of the Memorial Tournament presented by Nationwide at Muirfield Village Golf Club on June 4, 2015 in Dublin, Ohio. (Photo by Chris Condon/PGA TOUR)  -

Each week, GolfChannel.com takes a look back at the week in golf. In this edition of After Further Review, our writers weigh in on Cheyenne Woods' big win at the Australian Ladies Masters, D.A. Points' disqualification and Jimmy Walker's close call at the AT&T Pebble Beach National Pro-Am.

The Australian Ladies Masters was a huge victory for Cheyenne Woods in that it brought her out of her famous uncle’s considerable shadow.

It’s also significant in that it’ll open up a plethora of playing opportunities on the LPGA, because, after all, what tournament director wouldn’t want her in the event?

But the rush to anoint her as the next superstar in the women’s game is premature, and it overlooks not only her modest résumé but also the better, and younger, players who dot the women’s golf landscape.

You know, the Lydia Kos and Lexi Thompsons and Jessica Kordas and Ariya Jutanugarns. Moving forward, let’s hope her play continues to be more notable than her surname. – Ryan Lavner

Cheyenne Woods may not qualify as a Tigress just yet, but she has game. Watching her struggle to get to the LPGA, failing in two attempts to get through Q-School, you couldn't help but wonder if she had what it takes to make her own name as a player.

You had to wonder some more when she couldn't do better than 78th on the Ladies European Tour Order of Merit as a rookie last year. That tour isn't anywhere near as deep as the LPGA.

Through it all, though, Woods believed. We saw the magic in her breakthrough win at the Aussie Ladies Masters Sunday. She was confident and in command while beating a very respectable field. It was a big step. – Randall Mell

D.A. Points’ disqualification for using a training device during competition once again cast a spotlight on the ugly side of professional golf: Players receiving penalties after watchdogs snitch to officials.

Few people enjoy this gotcha spectatorism, but even fewer understand it. In today’s digital age, this information passes with light speed.

It often doesn’t include the traditional idea of a television viewer calling the tournament office and reporting a violation; it can spread through social media like wildfire, as this one did.

And though you may not like it, I’ll counter by playing devil’s advocate: What if Points’ violation was seen by on-course spectators and at-home viewers, but the PGA Tour closed its ears to such correspondence? It would allow a player to continue competing when the rest of us know he should have been penalized.

Trust me: Officials at the highest level dislike the idea of these call-ins even more than you. But it’s more important to ensure the right ruling is made, regardless of how it comes about. - Jason Sobel

A decade ago this week on a tree-lined golf course in Panama, Jimmy Walker lapped the field at a Web.com Tour event by five strokes, overpowering the course and competition with a powerful swing and aggressive style.

He would go on to claim the secondary tour’s money title in 2004, but before he was able to deliver on all that potential he was slowed by a neck injury before his first start in Hawaii.

The difficult years that followed, however, faded on Sunday at Pebble Beach when he claimed his third title in his last eight starts. After a decade adrift, the hard-swinging Walker picked up where he started 10 years ago in Panama. – Rex Hoggard