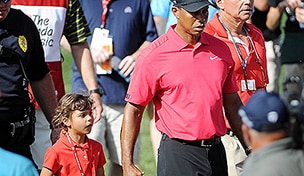 Each week, GolfChannel.com takes a look back at the week in golf. In this edition of After Further Review, our writers weigh in on Tiger Woods' back injury that forced him to withdraw from the Honda Classic, the finish that tripped up Rory McIlroy and several others at PGA National and favorites for the Masters.

Here’s what we know about Tiger Woods’ withdrawal because of a back injury on Sunday: He can’t blame it on the hotel bed this time. Other than that, everything else is open to interpretation.

Leaving his hometown Honda Classic with five holes to play, I instantly recalled an interview room back-and-forth that I had with Woods prior to last year’s Deutsche Bank Championship. At the time, I asked him if he was worried about the long-term effects of a lingering back injury. After all, he was still receiving daily treatments and was just days removed from gutting out a runner-up result at The Barclays after suffering a similar injury.

He stared me down and offered a one-word answer: “No.”

He then elaborated, but I still didn’t believe him. Anyone who’s ever felt a back tweak has worried about its aftereffects. When that anyone is a man chasing Jack Nicklaus’ all-time major record, there isn’t a chance his real answer could have been no.

After he walked off the course Sunday, he gave a few quick comments to his personal media liaison, but didn’t stick around for questions from the press. When he finally does, I’d like to ask him again – six months after the last time I asked him – whether he’s worried about the long-term effects of a lingering back injury. – Jason Sobel

In case we had forgotten, Sunday’s final round at PGA National served to reiterate that golf is, at times, a rather humbling game. Over the last two hours of the Honda Classic, no shortage of players appeared in position to potentially win, only to backpedal one after the other. Chips were flubbed, par putts missed and balls appeared to have a magnetic draw to the various water hazards on the Champion Course. All four of the playoff participants made it to extra holes despite shooting 2-over 37 or worse on the back nine.

More often than not, these guys make it look easy. Two-shot leads through 54 holes tend to become two- (or three-) shot victories. Every now and then, though, the game with which most amateurs are familiar plays out live on television among even the best players in the world. – Will Gray

With the Masters a little more than a month away, Bubba Watson and Jason Day look like they ought to be the favorites.

With all the tight-throated failure that transpired at the end of the Honda Classic Sunday, Watson's 64-64 weekend finish at the Northern Trust Open two weeks ago looks even more impressive. It wasn't just the winning there. It was seeing Watson driving the ball so well and hitting the draws and fades and towering iron shots required at Augusta National.

Day looked equally sharp mowing down everyone who lined up against him at the Match Play Championship last week.

Two months into the new year, Tiger Woods looks lost or maybe just hurt. Adam Scott, Henrik Stenson and Phil Mickelson are still searching for form. Rory McIlroy is searching for better Sundays. The clock is ticking for all of them with the year's first major swiftly approaching. – Randall Mell

Despite a wraparound schedule that has made the PGA Tour’s once anemic offseason non-existent and a West Coast swing that, at least in theory, should be stronger than ever, the circuit’s unofficial opening day has set up shop in South Florida. Last week, before he blazed a trail to the weekend at the WGC-Accenture Match Play Championship, Graeme McDowell acknowledged as much. “I was really looking at next Thursday (at the Honda Classic) as the beginning of my season,” he said. This week’s Honda Classic had seven of the top 10 players in the world and a leaderboard to match. Officially we may be 15 events into the 2014-15 schedule, but Sunday felt like the real beginning. – Rex Hoggard