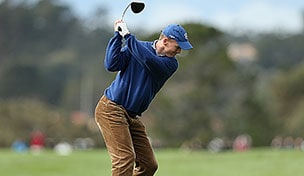 Getty Images
Rory McIlroy of Northern Ireland reacts on the 11th green during day 2 of the BMW PGA Championship at Wentworth on May 22, 2015 in Virginia Water, England. (Photo by Warren Little/Getty Images)  -

PEBBLE BEACH, Calif. – Few who braved Friday’s frigid rain and wind at the AT&T Pebble Beach National Pro-Am seemed to enjoy the experience as much as Peyton Manning. Less than a week ago, the Denver Broncos quarterback was in the center of the Super Bowl storm.

By comparison, Friday’s tempest was a welcome refuge.

“I’ve played in this event once before. It’s a great tournament with a great cause, and I was honored to get invited to play,” Manning said. “Playing these three great golf courses, I’ve enjoyed my time.”

Manning, who played a practice round on Wednesday with New England Patriots head coach Bill Belichick, was paired with Scott Langley, a devoted Green Bay Packers fan, who said he steered the conversation well clear of golf.

“I realized the popularity of Peyton Manning’s signature based on the number of text messages I got from all my friends who wanted an autograph from him,” Langley said.

Langley also said he gained a new appreciation for Manning on Thursday during the duo’s opening round at Monterey Peninsula Country Club.

“There was a little 10-year-old kid who had a football, and Peyton grabbed it and started walking down the fairway with it. The kid started chasing after Peyton and Peyton said, ‘No, you have to go long,’” Langley said. “In Peyton fashion he gunned a 30-yard pass to him. A bucket list moment for the kid.”