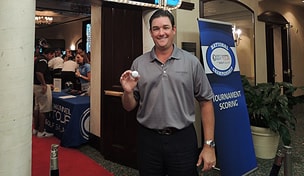 PONTE VEDRA BEACH, Fla. – How's this for a couple of good holes? Ted Embry (pictured) not only had an eagle on Tuesday playing the Dye Valley Course at the TPC Sawgrass, but he also had a double eagle. The albatross came on the par-5 eighth hole during play in the Championship Flight.

Embry shot 73 and is currently in fourth place, three shots behind leader and playing partner, Brian Beach of Missoula, Mont.

Embry said his only thought before he holed out his second shot on the eighth was not to hit his 2-hybrid right, into the trees, like he had done a couple of days earlier during a practice round.

'It landed a little short of the green and jumped up,' recalled Embry, who plays out of Newport Beach (Calif.) Country Club, where he carries a 1-handicap. 'My caddie said 'snuggle up to the pin.' To me, it looked like it was stopping, then it disappeared.'

Embry said he gave all the shots back on the next three holes before he holed out a second shot on the par-4 12th for eagle.

Afterwards, he bought drinks for his playing companions at the TPC Sawgrass clubhouse.

Turns out he could afford them. Both the eagle and the double eagle won him skins money.

If you want to talk about a swing in fortune, though, imagine opening with a 44 only to better it by 12 shots on the back nine. That's what Steven Paul did playing in the Hogan Flight on his way to a 76 on the Ocean Course in his first round.

Paul, who is from Waltham, Mass., followed with an 83 on Tuesday, and sits in third place, four strokes off the pace set by Robert Simpkiss of Palmer, Mass.

That 12-shot improvement, however, is nothing compared to what Stephan Ballentine did on Tuesday during his second round on the Stadium Course on Tuesday. When he sunk his birdie putt on the 18th hole at the Stadium Course, he raised his arms and shouted, 'That's for a 62.'

Trouble was that he had only played nine holes, having started the day on the back nine. He was also too hard on himself. It was actually a 60 that included three nines on the scorecard. His 41 on his next nine represented a 19-shot improvement, which might be a record. Who knows? It was still a 101, but it could have been much worse without the drastic improvement.

Ballentine's performance was a little out of the ordinary. Earlier this year, the San Jose resident paired up with Jon Majica of San Francisco to win the Am Tour's 'Duel in the Desert.'

'I don't know what happened to him,' said Majica, who was following his friend on Tuesday. 'I've never seen him play this badly.'

Former MLB pitcher Mark Mulder turned in the low round of the Golf Channel Am Tour National Championships Tuesday, carding an even-par 72 at Dye’s Valley Course at TPC Sawgrass and moving up from 29th to eighth place at 10 over in the Championship Flight.