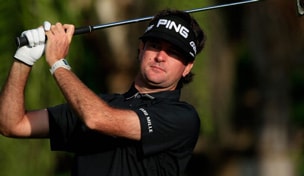 Getty Images
MEMPHIS, TN - JUNE 10: D.H. Lee of Korea hits off the 12th tee during the second round of the FedEx St. Jude Classic at TPC Southwind on June 10, 2016 in Memphis, Tennessee. (Photo by Andy Lyons/Getty Images)
-

ORLANDO, Fla. – Bubba Watson shot an 11-over 83 Thursday at the Arnold Palmer Invitational and withdrew after the opening round, citing allergies.

Watson made an 11 on the par-5 sixth hole at Bay Hill, where he pumped three tee shots into the water. He also made a triple bogey (on 18), three bogeys and a lone birdie. It was his second-worst score on the PGA Tour, behind only his 84 in the 2008 Memorial.

Prior to this week, Watson hadn’t finished worse than second in his last three stroke-play events, including a victory at Riviera.

On Thursday afternoon, the 2012 Masters champion tweeted this:

Last year, Watson told reporters that he doesn’t play in Tampa anymore because of allergies. “Every day of my life I take allergy pills, nose spray and eye drops,” he said at the time.