COLORADO SPRINGS, Colo. – It’s probably no coincidence amateur Amy Anderson got off to such a fast start in Thursday’s start of the U.S. Women’s Open.

You almost need to be a math wizard to win this U.S. Women’s Open with all the extra calculations needed to figure how much farther the ball will fly at The Broadmoor than it does at sea level. It isn’t just the elevation (6,200 feet) affecting carry. It’s all the uphill and downhill shots. Given the difficulty of these greens, hitting approaches below the hole is important.

After posting a 3-over-par 74 before the rain hit in the first round, Juli Inkster confided that she and her caddie carry a “graph chart” with their yardage book to help her pick a club.

Christina Kim said a player could get carried away plugging variables into a formula for how far she hits the ball in altitude, if she wanted.

“Walking at altitude, even your heart rate and circulation is affected,” Kim said.

“I like to walk around the sprinkler heads to make it look like I’m doing the work,” Kim cracked. “I don’t know, maybe it’s because I’m Asian, but I like knowing all those numbers . . . but then I forget them, except the last number I get.”

John Killeen is Kim’s caddie. He provides that last number.

“You get a lot of people trying to over analyze it,” Killeen said. “You pick a number and go with it. Simplify it.” 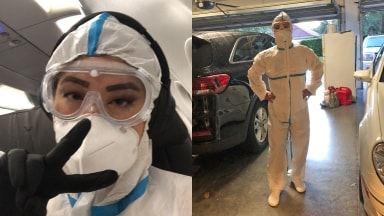