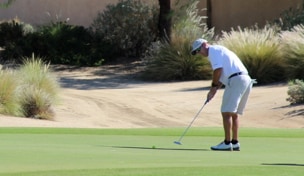 Getty Images
UNITED STATES - MAY 09: Steve Williams hit nearest to the pin at the 17th green and gets high fives from Tiger Woods during practice for THE PLAYERS Championship held on THE PLAYERS Stadium Course at TPC Sawgrass in Ponte Vedra Beach, Florida, on May 9, 2007. (Photo by Stan Badz/PGA)  -

LA QUINTA, Calif. – Mike Knox found the perfect salve to wash away the pain of a tough stretch of golf on the Nicklaus course at PGA West during the second round of the Golf Channel Am Tour Senior National Championships.

Knox and his wife, Val, watched their son, Russell Knox, clinch his PGA TOUR card for 2014 with a strong finish at the Web.com Tour Championship on a course they all know well, Pete Dye’s Valley course at TPC Sawgrass.

Russell Knox shot a final-round one-under 69 for a tie for sixth place, finishing at seven-under-par, three shots back of winner Chesson Hadley. The performance propelled Knox into 20th place among the 50 players who earned TOUR cards based on the new fall qualifying system that has replaced Q-School.

'It was a rollercoaster of a day,' Mike Knox said. 'I’m just so proud of what he has accomplished.'

Russell Knox, who turned pro in 2007, learned the game growing up in Scotland. When he moved to Florida to play golf at Jacksonville University, his parents soon followed him to the place all three now call home.

Mike Knox, who originally moved to Scotland when he was 21, said nerves tormented him throughout his round on the Greg Norman course. Playing in the Sr. Palmer flight, he shot 11-over-par the final four holes. That’s a far cry from the day in 2011 when he won an Am Tour event at TPC Sawgrass, while his son captured the Chiquita Classic in Ohio.

'When Russell gets home, I’m going to have a lesson,' the 58-year-old joked. “I’ve got two days to go (to make up some shots). That’s okay (how I finished). There was a lot on my mind. Tomorrow I don’t have to think about him. Today was his day.'

Mike Knox said he wanted his son to “play safe” by competing in more Web.com Tour events instead of PGA TOUR events late in the season to guarantee his status next season. His son didn’t listen. “He was so confident that he would win a PGA TOUR event,” Mike Knox recalled. “He stuck with it every chance he got. He played well, with the exception of a putt or chip here or there, he could have easily been in the top 125 (in the FedEXCup).” Alan Brumley, 53, of Atascocita, Texas, sank a hole-in-one on the eighth hole of the Nicklaus course at PGA West during the second round Sunday, a shot that propelled him up the leaderboard in the Jones flight. Brumley, a regional sales manager in the natural gas industry, used an 8-iron from 135 yards for his second career ace. None of the three players on the tee saw the ball go in, but one of their wives behind the green did. It took one bounce, rattled the flagstick and crawled inside the cup.

'It was a shocker,' he said. 'I played so bad yesterday in round one. My expectations were not good going into today.

'It was an awesome feeling. You never expect the ball to find the bottom of the cup.'