Am Tour: It's a family affair at National Championships for two father-son combos 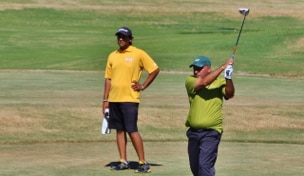 Getty Images
KIAWAH ISLAND, SC - AUGUST 11: John Daly of the United States hits off the sixth tee during Round Three of the 94th PGA Championship at the Ocean Course on August 11, 2012 in Kiawah Island, South Carolina. (Photo by Jonathan Ferrey/Getty Images)  -

LA QUINTA, Calif. – The fist bump Harminder Dhani gave to his caddie meant so much more than just to celebrate birdie on the 15th hole of the Nicklaus course at PGA West. It was a fun family bonding moment between Dhani and his 22-year-old son, Hardeep.

The two are enjoying a little father-son camaraderie in the desert this week, serving as caddies for one another at the Golf Channel Am Tour National Championships. Hardeep finished third in the Championship division of the Open tournament earlier this week, while Harminder is just getting started in the Hogan division of the Senior Flight, which concludes Tuesday.

The 10-handicap, who won two local events in San Diego this summer, said he relies on his son to line up properly on iron and tee shots.

“He had a choice to come this week or not,” said Dhani, 53, who is an engineering consultant. “He was a little let down he didn’t win, but I was pleased he decided to help me with my game. Spending time together helps. … It definitely helps bring us closer together.”

Hardeep, who recently graduated from USC with a degree in mechanical engineering, said his father’s positive advice helped him mentally after bogeys and bad shots. Hardeep, a plus-two handicap, said he hopes to turn professional next summer.

“We have had more like a friend relationship this last eight years. Obviously, we are father and son, but we are buddies helping each other out,” Hardeep said.

The duo is not the only father-son combination competing in the Coachella Valley. Stephan Sitar and his son, Dustin Sitar, caddied for each other at nationals four years ago at TPC Sawgrass but couldn’t pull it off this year due to conflicting work schedules. Dustin, 32, played in the Championship division of the Open tournament, then returned home to Las Vegas, where he plays poker for a living. He began playing golf about 10 years ago after his father bought him lessons. Now he’s a member at Spanish Trail Country Club with a low handicap.

“He has taken his game to the next level,” his father said. “He practices a lot, plays a lot. He has really improved.”

Stephan, who also lives in Vegas, said as a player in the Jones division (for handicaps ranging from 16 to 19.9), he does not set high expectations.

“I’m absolutely in it for the fun,” he said. “At my age, anybody who meets me, they’ll tell you Steve is happy-go-lucky. You can be pretty miserable in a hurry if you’re not. The courses are all in great shape. It’s beautiful weather. It is so pretty every morning.”