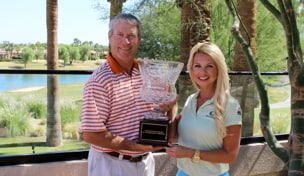 Getty Images
MEDINAH, IL - SEPTEMBER 28: Phil Mickelson of the USA kisses his wife Amy on the first tee during the Morning Foursome Matches for The 39th Ryder Cup at Medinah Country Club on September 28, 2012 in Medinah, Illinois. (Photo by Mike Ehrmann/Getty Images)  -

LA QUINTA, Calif. - In one swing, the five-shot lead Bob Brooks had worked so hard to build was melting away.

Brooks’ approach shot to the ninth green of the Palmer Private course at PGA West found the water, leading to a triple bogey seven in Tuesday’s final round of the Senior Championship Flight at the Golf Channel Am Tour Senior National Championships.

Brooks, 56, of Bella Vista, Ark., took his time heading to the 10th tee to regain composure. A critical birdie on the 10th hole got him back on track. Even his bogey at no. 15 and a double bogey at no. 16 didn’t matter. His final-round two-over-par 74 added up to a nine-over-par total of 297 for the tournament, two strokes clear of Ron Quick of Los Angeles.

“Being able to come back with that birdie at 10 showed me that if I just kept my game at the pace I was playing, the guys I was playing with would really have to shoot well to catch me,” he said.

Brooks, in his first year on the Am Tour, certainly made his mark this season. He won his flight in two Am Tour events earlier this summer and finished second in two others. He was steady all week in the Coachella Valley, although he admitted being a little too nervous during a third-round 78.

He spent two hours a day for two weeks practicing his short game to prepare for nationals. He dialed in his wedge shots from 30 to 80 yards.

“I actually cut my playing schedule down,” he said. “I needed to practice specific things. It paid dividends this week.

“If you miss it on these courses (at PGA West), you get in some unusual ball positions in the rough and fairway. There are a lot of elevated greens and moguls. The ability to hit it within 10 feet is a real plus if you want to make par or a birdie on a par-5.”

Brooks didn’t take up the game until age 30 after a broken leg during a rugby match. He didn’t want to sit around waiting to heal, so he began walking nine holes of golf with a cast on his leg.

“I was a little sweaty and sore, but it really benefitted me to learn that way,” he recalled. “It taught me a lot about balance in the swing.” Jim Allard turned his trip to the Golf Channel Am Tour Senior National Championships into a golfer’s dream – a month-long cross-country golf bonanza.

It took Allard 13 days – and 12 rounds of golf - to drive more than 3,000 miles from his home in Dover, N.H., to PGA West in the Coachella Valley. His reward was a national championship in the Senior Snead Flight (for handicaps higher than 20).

Allard shot the best round of his life, an 83 in the third round, to set up Tuesday’s final-round 94 at the Stadium Course. His four-round total of 367 was four shots better than Nimal Gunasinghe of St. Louis, Mo.

He’s thrilled with the victory but not the promotion to the Jones flight that comes with it.

“I’ll go from the top to the bottom of the standings,” he joked.

Allard, 65, took up golf in 2002 after a heart attack derailed his career as an underwater photographer. Allard, who works in the Information Technology industry, started playing the Am Tour in 2006. This was his fifth national championship appearance.

He admitted it was tough to focus after so much golf and such a long trip. He lost seven balls during his first round at the Palmer Private course, which was more than the 12 courses he played prior the tournament combined.

There’s no rest in sight, either. He’s driving a northern route home, playing another dozen or so rounds before he gets home sometime around Oct. 15. He has dreams of playing golf in every state. He’s at 36 currently, 11 alone on the trip out to California.

“If all goes as planned, I’ll only have Alaska, Texas, Alabama, Mississippi and Louisiana left,” he said.

Funny thing is, he never plans anything. He doesn’t know what courses he’ll play or where he will sleep going home. He sleeps on a mattress in the back of his van, parking for the night at truck stops whenever he gets tired.

He sets a goal each year of playing at least 50 new courses. His favorites on the way out west were We-Ko-Pa Golf Club near Scottsdale, Ariz.; the Old Kinderhook Golf Club in Missouri and an out-of-the-way visit to the North course at Torrey Pines in southern California.