Am Tour: National Championships' Strong is the elder statesman at PGA West 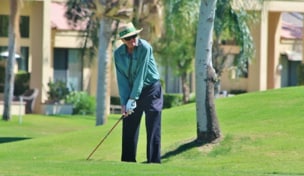 Getty Images
One of the many, classic commercials FedEx has unveiled. Mr. Chambers and I would be flabbergasted if you didn't like this one. View commercial <a href='http://www.youtube.com/watch?v=jmZqT3VorUg' target='_blank'>here.</a>  -

In eight years of playing the Am Tour, Strong estimates he’s won 45 tournaments. His best finish in five appearances at nationals is second in the Snead flight two years ago at PGA West in 2011.

“I’m here to win it,” he said just moments after the second round on Sunday. He's currently in 10th place heading into the final round Tuesday.

The desert heat has been tough on everybody this week, but especially Strong. He wears pants, a long sleeve shirt and a bucket hat to guard his skin from the sun. He’s had several bouts with cancer and doesn’t want to chance overexposure.

His son, Joe III, reintroduced him to the game about 16 years ago after he retired. He now plays five times a week and organizes a traveling golf club with friends called The Farm.

“Golf keeps me alive,” he said. “If I wasn’t playing golf, I wouldn’t be doing anything.”

His family name is quite apropos to his game. He regularly outdrives players three decades younger. Joe III said he recently witnessed his father bang a 350-yard drive.

“It was wind-aided, a fluke thing,” his father objected.

Strong stays fit by lifting weights and doing pushups at home every day. He’s never been in a gym a day in his life.

Joe III, who lives in Fountain Valley, Calif., and his father are evenly matched. They shot the same score on the Palmer Private course at PGA West during a practice round last week. They play at least once a week together.

John Scheirman's hole-in-one on the 12th hole at the Palmer Private course at PGA West gave him a wave of momentum. His 6-iron from 161 yards was his third career ace and second this summer. 'I was playing horrible on the front nine,' said Scheirman, who lives in California. 'The first guy up hit the ball to three feet. I'm thinking, 'This guy is unbeatable.' I swung like I didn't care.'

Scheirman shot to a solid 40 on the back nine, which kept him in third place in the Sarazen flight. 'Everything that could have went right, went right,' he said. 'I hit a ball in the water, but it hit the concrete and bounced out. If they were selling lottery tickets on the back nine, I would have bought one.'

Heading into the final day of the tournament, there are some tight races in the top two flights. In the championship flight, Bob Brooks of Arkansas has a two-shot lead over K.C. Fox of Florida. In the Hogan flight, Randy Hodges of Texas holds a slim one-shot lead over three players. John Scott of Texas (Jones), Larry Stone of Florida (Palmer), Richard Stein of New York (Sarazen) and Nimal Gunasinghe of Missouri (Snead) hold leads of at least seven shots in their respective flights.