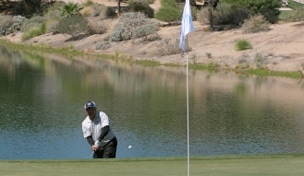 Getty Images
DAYTONA BEACH, FL - DECEMBER 02: Ayako Uehara of Japan acknowledges the crowd during the final round of the LPGA Qualifying School at LPGA International on December 2, 2012 in Daytona Beach, Florida. (Photo by Sam Greenwood/Getty Images)  -

LA QUINTA, Calif. -- Getting to La Quinta is pretty easy, particularly for those who live in the southwest.

But among the more ambitious travelers coming to the Golf Channel Am Tour National Championships, which include many from Canada and several from Hawaii, is a group of dedicated Am Tour players from Puerto Rico. It's a small but dedicated Tour that has had its roster of local events increased from 8 to 16 and will host an Am Tour major tournament at Trump International Golf Club next February.

Among them is Carlos Restrepo, who was born in Colombia but moved to the United States and later Puerto Rico, lives in Dorado near famed Dorado Golf & Beach Resort, which is where native golf legend Chi-Chi Rodriguez lives these days. He also recommends Trump International Golf Club as well as next door Bahia Beach Golf Club.

Restrepo said getting to Palm Springs from San Juan required connections in both Atlanta and Salt Lake City, resulting in a 12-hour total travel duration. He says he used the opportunity of being in California to come early and head up the coast and play Pebble Beach before coming to La Quinta for a couple practice rounds.

Also competing in the Sarazen Flight with Restrepo are Hector Boria, Erick Cuadrado and Jose 'Guzzy' Guzman. Sebastian Renta is competing in the Hogan flight (8-11.9 hcp), Wallace Rodriguez is in the Snead flight (20-plus hcp) and Alejandro Garcia is in the Jones flight (16-19.9 hcp).

'We play all the time together,' said Restrepo. 'A lot of us met through the Golf Channel (Am Tour). Being as competitive as we are, it works very well.'

There won't be much time off for the Puerto Rico players this week. After action ends on Wednesday, their first Am Tour event of the year is takes place this coming Sunday.

'We have our own little rivalries,' said Restrepo, who finished first in his flight on his local tour this year. 'So we want to see who did best and who did worse and we rag 'em all the way home.'

After the Sarazen flight's morning wave on the Norman Course at PGA West, Hector Boria has bragging rights among the Puerto Rico tour Sarazen Flight competitors, shooting a 92, good for T-29. Restrepo is right behind him with a 93. Damian Smith of Houston currently leads by three with a tidy 78. 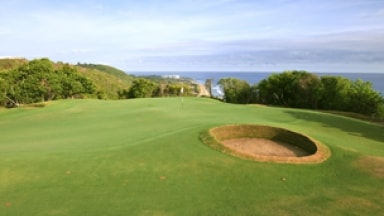 In this edition of Ginella's Journeys, Matt Ginella visits the Caribbean island and U.S. Commonwealth of Puerto Rico. There isn't much new golf being built these days. But the projects that are opening are pretty spectacular. Here's a recap of new courses Brandon Tucker visited in 2012. 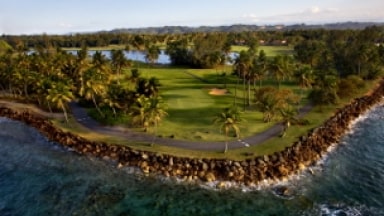 At some point this winter, the snow and cold will steer your thoughts towards the balmy golf courses in the Caribbean. Question is, which destination is right for you? Here are six of the best options.