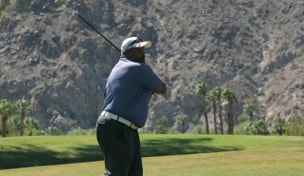 LA QUINTA, Calif. -- Some golfers may go a lifetime without playing the amount of competitive golf David Small played this season.

Small, from the St. Peters, Missouri, is competing in his 54th Golf Channel Am Tour event of the season this week in the National Championships at PGA West. He joined Am Tour five years ago, just months after picking up the game of golf and is competing in the Snead flight (handicaps 20 and above). Now 48, he says Am Tour is his new outlet for competition.

'I used to play college football,' said Small, who went to Purdue. 'It's hard at my age to do any serious competition.'

He's not the only ex-athlete in the field. Former MLB pitcher Orlando Hernandez ('El Duque') is competing this week as is Mark Mulder.

Small's 2013 schedule, which includes four wins, is a bucket list of golf unto itself: major championships at Innisbrook Resort, Blackwolf Run and PGA National among many others. The highlight of his Am Tour career is winning a major, The Classic at Payne Stewart Golf Club in Branson in 2011 by 19 shots after losing in a playoff the year prior.

Small says his work schedule, which has a good dose of travel, helps him find tournaments regularly throughout the season from coast-to-coast, but he also travels specifically for events, too. His favorite venues so far are here at PGA West, as well as PGA National and TPC Sawgrass in Florida, all of which are staples on the PGA Tour rotation.

'That's why everyone joins the tour,' he said. 'To play those courses.'

Small finds himself in the middle of the pack in 30th place after round one, 15 strokes off the pace with three more rounds to go. Leading the Snead flight is Kevin Jones from Atlanta, Georgia. For having the flight's low round of the day, Jones receives a National Championship pin flag, Golf Galaxy gift card and low round hat.

First hole-in-one recorded for the week Hawaii's Terrance Katakura aced the 4th hole of the Norman Course at PGA West in Round 1.

With four courses double-teeing and sending out A.M. and P.M. waves, the hole-in-ones should be dropping in bunches this week at PGA West. It took until the afternoon wave of day one for the week's first ace to be recorded. Terrance Katakura, 33, from Hawaii and playing in the Sarazen flight, aced the 4th hole of the Norman Course at PGA West with a 9-iron.

Katakura shot a 90 and finds himself tied for 33rd place in Nationals' largest flight. Before he can tee off in round 2 at 8 a.m., he's on the hook for dinner tonight.