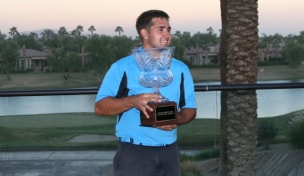 LA QUINTA, Calif. -- It was a flurry of excitement in the afternoon waves at PGA West, culminating with a blustery finish and two playoffs.

A high wind advisory was in effect for Wednesday afternoon throughout the Coachella Valley. Sometime around 2 p.m. local time, the desert fan came on in a big way. Palm trees swayed and sheets of water sprayed across the pond bordering the 9th and 18th greens of the Nicklaus course at PGA West just below the clubhouse.

Only the strongest swings would survive. The Championship flight, playing at the Palmer Private course, saw the first of two playoff finishes in this year's National Championships.

Oakley Murphy overcame an opening round 82 to record rounds of 71-68-73, including a clutch five-foot par save on the last hole to force a playoff with Paul Erdman of Erie, Colo., who shot a 2-under 70. The two finished seven clear of the rest of the field.

Murphy prevailed on the first playoff hole, the par-4 10th, for his first National Championship crown.

Before the wind picked up, Murphy managed an eagle on the par-5 2nd hole and managed a 2-over 38 on the back nine. But the back nine was a far different story. Only the par-5 11th hole had a scoring average below par for the day on the back nine, while the rest were well above par.

'It's hard to go low when it's windy, he said. 'So I just tried to hang in there and make par.'

Murphy, who credits his grandpa for introducing the game when he was in high school, called his nationals victory his top golf achievement thus far.

'I like the pressure,' he said. 'I like playing the game. Next year I'm going to play some bigger tournaments, try to qualify for stuff.'

Playoff drama in the Sarazen flight on the Nicklaus Course Rafael Rodriguez prevailed in the Sarazen flight on the Nicklaus course at PGA West.

The Sarazen flight (12-15.9 handicaps) was the Championships' largest with 138 competitors. As high winds swept through Coachella Valley in the afternoon, players scores began to skyrocket until there were only two players left standing: George Yocum and Rafael Rodriguez, who carded 86 and 84, respectively on the Nicklaus Course at PGA West.

The two finished with scores of 338 over four rounds, nine clear of the rest of the field, and headed back out to the Nicklaus' course's 18th hole, a long par 4 playing into the breeze and guarded by water all down the right side and with O.B. left.

After both players put tee shots in play, Rodriguez was away in the fairway, 220 yards away and considered laying up before deciding to go for it.

'I have a strong long-iron game and I knew that's what I needed to keep the wind in check,' he said. 'I pulled out a 5-iron and gave it my best swing.'

After finding the green, Yocum found the water with his approach shot and Rodriguez, in front of a large crowd behind the 18th green, took home the trophy.

'Nothing compares to this,' he said. 'The adrenaline of going back in a playoff and having everyone cheering and lining just like you see on TV was special.'