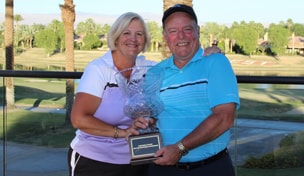 LA QUINTA, Calif. – Richard Stein has become used to hanging around leaderboards on the Golf Channel Am Tour.

Stein, 55, of Cheektowaga, N.Y., won the Senior Sarazen Flight (for handicaps 12-15.9) at the Golf Channel Am Tour Senior National Championships at PGA West.

Stein shot a final-round 89 on the Nicklaus Tournament course Tuesday for a 337 total, six shots better than Michael Vogelsberg of Illinois. Stein has finished among the top five in his flight in every tournament he’s played in since joining the Am Tour last year except once. That lone exception, a sixth-place at last year’s national championship, provided motivation throughout the season.

He said playing on the Am Tour has re-energized his enthusiasm for the game.

“I have the potential to play well, but I was very inconsistent,” he said. “When I started playing on Tour, it re-sparked my interest. I started practicing more. The tour is a great thing. At my age, I’m starting to improve again.”

Stein’s father got him into the game when he was 8 years old. He played in amateur tournaments while growing up, even competing against Tiger Woods in the Porter Cup.

“We were at opposite ends of the spectrum (at the event),” he admitted.

Stein won his Am Tour crystal trophy with a steady game on four very tough courses. He only had one birdie the entire tournament, but his play out of the sand kept high numbers at bay.

“I managed to stay out of trouble and avoid the big number. That’s what did it for me,” he said.

His wife, Debbie, supported him throughout the journey, walking every round as a forecaddie. “I have the blisters to prove it,” she said.

Stein said he hopes to keep his game sharp through what could be a snowy off-season near Buffalo, New York. He must prepare for his promotion to the ultra-competitive Hogan flight in 2014.

“We do have a lot of indoor domes, where you can hit 120-yard shots,” he said. “My goal is to work on a few things and sharpen the golf swing and come out and do it again.”

John Scott held a nine-shot lead heading into the final round of the Senior Jones Flight (for handicaps 16-19.9) at the Golf Channel Am Tour Senior National Championships at PGA West.

That would give him comfort, right?

“It felt more like a burden,” said the 66-year-old Houston resident.

Scott shot a final-round 90 Tuesday on the feared Stadium course, his highest score of the week, but the round was still good enough for a total of 348, five shots better than Florida’s Charlie James, who made a charge with an 84.

Scott, who owns an insurance agency, started playing golf in college after his baseball practices at Tarleton State University in Stephenville, Texas. He played baseball (as a second baseman) left-handed but plays golf right-handed.

Scott played conservative with such a big lead. “I kept it in the fairway and out of the bunkers, and I made some putts,” he said.