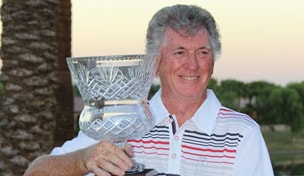 Henry won the Senior Palmer Flight (for handicaps 4-7.9) at the Golf Channel Am Tour Senior National Championships in a one-hole playoff, becoming the latest grand champion from Portrush and Northern Ireland.

Henry, 66, who grew up in Portrush and now lives in of Victoria, B.C., shot a final-round 74 Tuesday to force a playoff with Tennessee’s Bill Foley on the Private Palmer course at PGA West. On the first playoff hole at no. 10, Foley’s tee shot landed in a bunker, opening the door for Henry’s two-putt par for victory.

Like the three famous major winners, Henry, a retired air traffic controller, has a lifetime membership to the famed Royal Portrush Golf Club.

“I think all the good Portrush guys are still there. The bad ones moved to Canada,” he said with a laugh. “There have been some good players from there.”

Henry’s comeback from a double-digit deficit heading into the final round was impressive. He birdied the par-5 18th hole not knowing it would get him into the playoff.

“I was a long way behind. I didn’t think I had a chance,” he admitted.

This is his second year on the Am Tour. He won twice in 2012 at two strong courses on the Seattle tour, Chambers Bay and the Olympic course at Gold Mountain.

“I just played very steady all week,” he said. “I don’t hit it far, so I need to hit it dead straight to keep up with the guys who bomb it 40 yards past me.'

Randy Hodges had never played in a four-day tournament before his first appearance in the Golf Channel Am Tour Senior National Championships.

That makes Tuesday’s dramatic win in the Senior Hogan Flight (for handicaps 8-11.9) at PGA West even more remarkable.

He saved arguably his best shot for last, sinking a 10-foot birdie putt on the 18th hole of the Greg Norman course for a one-stroke victory over Randy Snodgrass of Indiana. He knew it was a big putt but wasn’t entirely sure it was to win a national championship.

Hodges, 53, from Montgomery, Texas, slept on a one-stroke lead and made it stand. He shot 77 in the final round to bounce back from a third-round 86 for a four-round total of 321. Snodgrass also kept pace with a pair of 77s the final two rounds.

“I was really proud today how I held in there,” said Hodges, who won two Am Tour tournaments at The Woodlands earlier this summer. “I made some putts coming down the stretch I needed to make. I got up and down for bogey on no. 15 after hitting it in the water. That was big.”

Hodges, who owns a daycare, said the nerves started once he took the lead after the second day. The Hogan flight was by far the most competitive of the week. Eight players finished within six shots of the winning score. He didn’t like waiting around all morning for the leaders to tee off. It just let the butterflies flutter faster and faster.

“It was tough sleeping,” he said. “We didn’t go out until the last group. There is a lot of sitting around trying not to think about it.”