Am Tour: Survival on the Stadium Course at PGA West 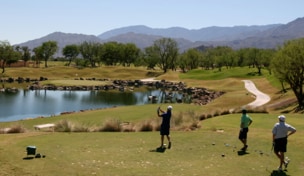 LA QUINTA, Calif. -- The PGA Tour played the Stadium Course at PGA West only once in 1987. The tour never returned after players signed a petition saying they'd never play it again.

And yet, Web.com Q-School is held here (final stage Dec. 12-17 this year), as if it's some sort of cruel hazing ritual performed to those pledging to play on tour. Survive here, and you may very well have the metal to make a living playing golf.

This week, Golf Channel Am Tour Nationals competitors aren't off the hook either, as Dye's Stadium Course is one of four courses in the rotation, which include the Nicklaus Course, Norman Course and Palmer Private Course at PGA West. In the first two days of action, the Championship and Hogan flights, the two top flights at Nationals, took dead aim at the Stadium.

The scores, as you might expect, have blemishes. As intimidating as the island green 17th hole, 'Alcatraz' can be, it's the 9th hole, a par-4 with water from tee-to-green down the right side, that has been the score-buster. At 4.98 stroke average (including 14 double bogeys and seven 'others'), it's the No. 1 handicap hole for a reason.

Today, in the Hogan Flight, Joshua Galarza turned in a tidy 74 to medal in his flight and take a one shot lead over Rafael Padilla heading into round three. His card was pretty clean -- with the exception of one double bogey on the par-5 11th hole.

The carnage may very well pick up in the next couple days on Stadium. In the final round, the Snead flight (20-plus handicaps) will face Dye's masterpiece.

The drop zone has been oft-used thus far on No. 17 of the Stadium on PGA West.

In the Jones flight, (16.0-19.9) Mike Easen shot his best round ever, 79, on the Nicklaus Course at PGA West. Easen, from Keller, Texas., credits a friend who recently gave him a copy of the legendary instructor's Little Red Book.

'I've never broken 80,' said Easen. 'One of my friends got it for me. Mentally, the book's helped me tremendously. That and I found my tee ball today.'

Easen takes an eight shot lead into round three of the Jones flight, where he'll tee it up on the Norman Course at PGA West. Hoping to make up some ground on Easen is Gregory Vines, from Union, Kentucky.

After a rough opening round, Pasquale Sprague, playing in the Championship flight, had is fortunes turn in a big way in round two. Not only did he shoot a 76 on the Nicklaus Course, his round also included a hole-in-one on the par-3 3rd hole. Sprague hit a cut shot with a 7-iron to the uphill, 167-yard hole.

'I didn't see it go in the hole,' recalled Sprague, from Lincoln, Calif. 'I'd bent down to get my tee. Then Brian [Davis] in my group screamed, 'It went in the hole!'

'I had to do everything I could to not shank by tee shot on the next hole.'

It's the first hole-in-one in competition for Sprague. He and his crew will be trying to ride the lucky wave a little longer with a trip to an area casino tonight.