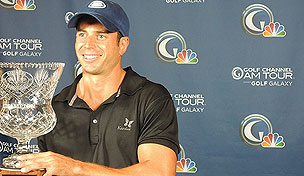 PONTE VEDRA BEACH, Fla. – Perhaps Ken Ambrosio was a little hard on himself. To hear the12-handicapper from White Plains, N.Y., describe his win in the Sarazenflight, you would have thought he played the worst golf of his life. In reality, though, he withstood the pressure just a little better than his closest competitors, hanging on for a one-stroke win in the Am Tour National Championships.

Ambrosio, who opened the tournament with a 76 on the Lagoon Course at Ponte Vedra Inn & Club on Monday, drew the Stadium Course at the TPC Sawgrass for Thursday's final round, and with the rain and changing conditions, it had its way with him and the other competitors. Ambrosio put two balls in the water, but did manage to save triple, on the treacherous island-green 17th, then doubled the 18th. Still, his 88 was one shot better than the 89 of his playing companion, Terron Gaines of Houston, whom he was tied with for the lead after Round 3.

'Honestly, it was the pressure,' Ambrosio said. 'Everybody was feeling it.'

Plus, the group was put on the clock late in the round. 'We were literally running between shots,' he said.

Of the six flight winners, Ambrosio probably felt the most relieved. Despite winning the title and getting the hardware to go with it, he said he wasn't satisfied with his performance.

'It's a mixed bag,' he said, 'because I didn't play as well as I thought I would. I thought I would come out here in and shoot about 80. But my swing fell apart, and I think that had to be because of the pressure I felt out there.'

Eric Bersano of Culver City, Calif., and Rafael Rodriguez of San Mateo, Calif., might have felt the pressure, too. They had final rounds of 88 and 95 to finish third and fourth, respectively.