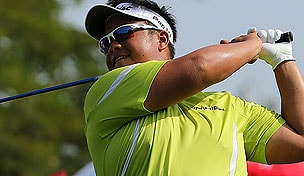 The player who has been called “Asia’s John Daly” may soon find himself on more PGA Tour leaderboards.

With his tie for third at the CIMB Classic, Kiradech Aphibarnrat will soon qualify for Special Temporary Membership on the PGA Tour. That means he would be eligible for an unlimited number of sponsor exemptions as he tries to earn his card for next season via the non-member money list or non-member FedEx Cup points list.

Aphibarnrat earned $406,000 in Malaysia, bringing him less than $14,000 shy of being eligible for Special Temporary Membership. Fortunately for the 24-year-old, he’s also in the field for next week’s WGC-HSBC Champions, which has a guaranteed payday. As long as he completes all four rounds, he should earn enough to qualify.

This year, Aphibarnrat has won on both the European and Asian tours. Prior to this week, he was ranked No. 86 in the world.