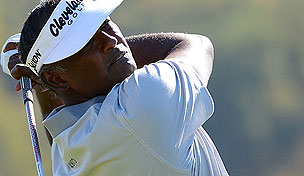 The first – and perhaps last – arguments were made on Thursday in the New York Supreme Court’s Commercial Division by attorneys for the PGA Tour and Vijay Singh, who sued the circuit earlier this year following the Fijian’s violation of the Tour’s anti-doping policy which was later dismissed.

In June, lawyers for the Tour filed a motion to dismiss Singh’s lawsuit over the circuit’s “reckless administration and implementation of its anti-doping program.”

Attorneys for both sides presented their cases before judge Eileen Bransten in New York, although no ruling was immediately available.

Singh admitted in a January article on SportsIllustrated.cnn.com to using the Ultimate Spray, which contained the substance IGF-1 (insulin-like growth factor) which is banned by the World Anti-Doping Agency and the Tour. He was later absolved of the violation when WADA issued a statement stipulating that taken in such small amounts, IGF-1 was not a violation unless it resulted in a positive test. Singh never failed a drug test.

WADA did, however, keep IGF-1 on its banned list during a recent review.

In the Tour’s motion to dismiss, the circuit cited Singh’s membership agreement which stipulates his only avenue for relief resulting from a doping violation is via an arbitration hearing, which was canceled following the WADA announcement, and the “well-established doctrine of judicial non-interference in the affairs of voluntary, private associations, such as the Tour.”