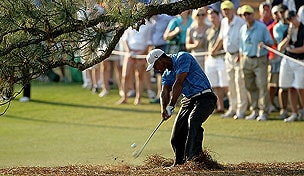 Getty Images
OAKVILLE, ON - JULY 25: David Hearn of Canada holds up his ball after putting on the fourth green during round three of the RBC Canadian Open at Glen Abbey Golf Club on July 25, 2015 in Oakville, Canada. (Photo by Minas Panagiotakis/Getty Images)  -

Augusta National chairman Billy Payne said in a statement Sunday that the Eisenhower Tree – the iconic pine that guarded the left side of the 17th hole – was removed because of extensive and irreparable damage from the winter storm.

“The loss of the Eisenhower Tree is difficult news to accept,” Payne said in a statement. “We obtained opinions from the best arborists available and, unfortunately, were advised that no recovery was possible. We have begun deliberations of the best way to address the future of the 17th hole and to pay tribute to this iconic symbol of our history – rest assured, we will do both appropriately.”

The tree, estimated to be 100 to 125 years old, was named after Dwight Eisenhower, the former U.S. president who was a member at Augusta from 1948-1969. Eisenhower hit the tree so often that he campaigned to have it removed, but Clifford Roberts, the club chairman and co-founder, denied the request.

The current world No. 1 also has unpleasant memories of one of the most famous landmarks in golf. Tiger Woods, a four-time Masters winner, injured his left knee and Achilles’ tendon when he squatted to hit a shot under Ike's Tree in 2011. He missed the next two majors that year.

Payne added that the course sustained “no major damage otherwise” and that “we will be unaffected in our preparations for the 2014 Masters Tournament.”

Bubba Watson, who won the 2012 Masters in dramatic fashion, was asked about the removal of the tree after his victory Sunday at the Northern Trust Open.

"Let's be honest, that tree was never in my way. I don't know what they're going to do. They never ask me, but I would think they're probably going to plant something there," said Watson after his first win since slipping on the green jacket. "It's a historic tree, but I never had a problem with it."