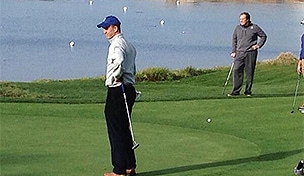 Getty Images
Cameron Tringale plays a shot from a bunker on the sixth hole during round one of THE PLAYERS Championship at the TPC Sawgrass Stadium course on May 7, 2015 in Ponte Vedra Beach, Florida. (Photo by Sam Greenwood/Getty Images)  -

NFL fans needed to do a double take Wednesday:

Peyton Manning and Bill Belichick – whose long history on the football field rivals any Rules of Golf manual – in the same practice-round group at Pebble Beach?

The San Francisco Chronicle speculated that the connection was likely because of Bill Perocchi, the Pebble Beach CEO who is a Boston-area native and avid Patriots fan, and probably had a hand in Manning’s 11th-hour addition to the event.

Still, it was an odd sight, indeed – especially after Manning’s Broncos eliminated Belichick’s Patriots in the AFC Championship game.

Of course, all sanity will be returned to the sports world Thursday, when Belichick will play alongside his own quarterback – Tom Brady – in the first round of the AT&T Pebble Beach National Pro-Am. Their PGA Tour pros are James Driscoll and Ricky Barnes.