Back for more: Clinton set to tee it up again 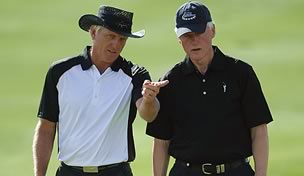 Former president Bill Clinton will again have a crack at a pro-am in two weeks, when he heads to Bogota to participate in the Pacific Rubiales Colombia Championship on the Nationwide Tour.

The Clinton Giustra Sustainable Growth Initiative is a beneficiary of the tournament in the event's third year. The initiative was founded in 2007 and provides aid for economic and social development projects in Colombia, Peru, Mexico and Haiti.

As part of the event, the 42nd President will compete in the Feb. 15 pro-am.

“President Clinton’s participation with the Nationwide Tour in Colombia extends the very positive relationship the PGA Tour has enjoyed with him dating back to his presidency,” said PGA Tour commissioner Tim Finchem in a release. “While we share an affinity for the game of golf with the President, we are bonded by our shared values of giving back.”

Clinton last competed with friend Greg Norman at the Humana Challenge two weeks ago. His Saturday round was cut short after nine holes, however, due to high winds in the Palm Springs area.