Backing up the talk: Katrek in the hunt in the Championship flight 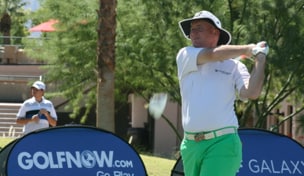 LA QUINTA, Calif. -- Just about everyone in the field this week had to, in all likelihood, take a week off work to compete in the four-round Golf Channel Am Tour National Championships at PGA West.

But your first round leader didn't. Following an opening round even par 72 on the Stadium Course at PGA West, Brian Katrek was up at the crack of dawn getting ready to host his radio show, Teed Off on Sirius-XM's PGA Tour Channel 93. After wrapping up at 8 a.m., he had some time to wind down before an 11:46 a.m. starting time on the Nicklaus Course for the 2nd round. He began the day two shots clear of three players: David Heinan, Hardeep Dhani and Michael Bunker.

Katrek, 40, didn't begin playing golf until the time he began covering it in the mid-1990s, which makes his ascent to scratch quite remarkable.

'I have the one job in the golf business that let's me play golf,' said Katrek. 'I'm very lucky. I get to play, I'm around some of the nicest people and greatest instructors. I was able to make up a lot of that ground in a hurry.'

A resident of the Atlanta area, he joined the local Am Tour in 2009. In 2013, he competed in six events, including the Myrtle Beach Classic major, and won the Atlanta Am Tour Championship with a two-day total of 153. This is his first time competing in the four-day National Championships, which means having to work in his radio show around his tee times for the week. As for on the golf course, he's keeping expectations pretty low.

'All these guys have jobs,' he said. 'A zero handicap is someone who shoots a really good score, two or three mediocre scores and maybe a bad one. 'That's what guys with jobs do.

In round one, Katrek walked the golf course with a caddie on the bag. For round two, however, he was back in a cart. The reason? His caddie was starting a new job.