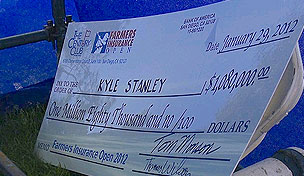 Kyle Stanley's lead in the Farmers Insurance Open grew so large - seven shots - on Sunday that tournament organizers made out the obligatory oversized winner's check for $1.08 million in his name. A photo was tweeted of the check, according to GeoffShackelford.com.

Unfortunately for Stanley, he neglected to do one thing. Win. He triple-bogeyed the final hole of regulation to fall into a playoff with Brandt Snedeker, which he then lost on the second extra hole.

Tournament officials weren't the only ones who prematurely conceded the win to Stanley. CBS Sports commentator Gary McCord left Torrey Pines before the 72nd hole, then turned around and returned to call the playoff from his post at the 16th-hole tower.