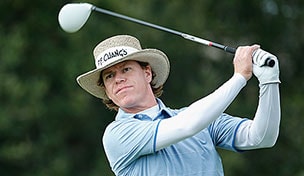 Getty Images
Laura Davies of England plays her second shot on the par 5, 10th hole during the first round of the 2013 Omega Dubai Ladies Masters on the Majilis Course at the Emirates Golf Club on December 4, 2013 in Dubai, United Arab Emirates. (Photo by David Cannon/Getty Images)  -

Making his 365th career start on the PGA Tour, Baird entered the final round of the McGladrey Classic with a share of the lead, in search of his first career win after five runner-up finishes. Instead, the 41-year-old finished one shot short once again after a bogey on the 72nd hole.

“It hurts to do what I did on the last hole, to make bogey on the last hole,” explained Baird, who found the water with his approach to No. 18 from a difficult lie in the fairway bunker. “I put myself right there in a great position.”

Making his return to the PGA Tour this season after 17 months out due to surgery on both shoulders, Baird had a chance to extend his lead to three shots with an eagle putt on the par-5 15th hole. Instead, the Florida native three-putted for par and saw Kirk draw even with a birdie two holes later.

Already with the most career earnings among active players without a victory, Baird saw his total money earned increase to $13,183,287 with his share of second place this week on the Seaside Course.

“This game’s so humbling, it’s incredible,” he added. “It’s not all about winning, I’ve said that, but this hurts. This really does. This is very disappointing.”

Baird can take some solace from Sunday’s result knowing that the $484,000 he received this week is enough to satisfy his major medical extension, reinstating him as a full-fledged PGA Tour member for the 2013-14 season.

“I’ve only played a few tournaments in a year and a half, and I know that I did a lot of good stuff this week,” said Baird. “You’ve got to take away some silver linings.”